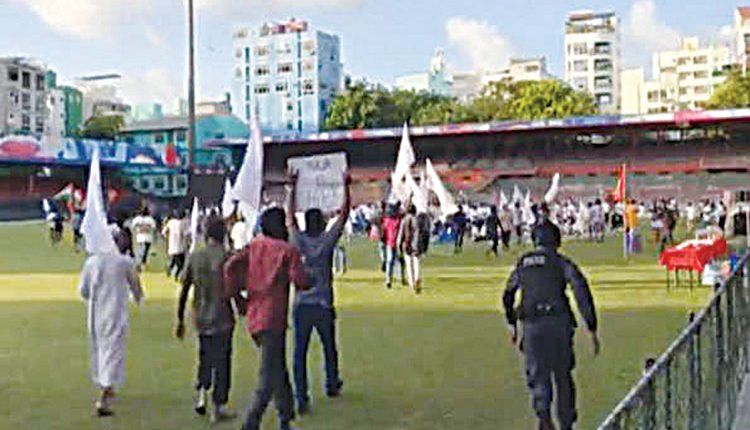 Male/New Delhi, June 21 (Agency) An International Yoga Day event in the Maldives capital that was being participated by the Indian High Commissioner and other senior officials was disrupted by Islamist elements, who ran into the stadium shouting and threatening participants. The ruling MDP has condemned the attack, while police have rounded up six people so far. Maldives President Ibrahim Mohammed Solih ordered a probe into the incident even as police said that the Islamic flags that the protesters were carrying had come from the office of the opposition Progressive Party of Maldives (PPM), of former president Abdulla Yameen. The International Yoga Day event was being held at the Galolhu football stadium in Male, and was hosted by the Maldives Youth Ministry in collaboration with the Indian Cultural Centre. Ambassador of India Munu Mahawar, diplomats and senior officials from the Maldivian government alongside members of the general public were doing yoga at the Galolhu National Stadium when the riotous mob stormed in, waving Islamic flags and threatening and pushing out yoga participants.

They were carrying flags containing verses from the Islamic Shahada. A Police spokesperson said that six individuals have been arrested over the incident – which is being investigated as a serious matter. Maldives President Solih said those behind the disruption would be swiftly brought before the law. President Solih said that Maldives Police Service has launched an investigation into the incident at Galolhu National Stadium, which is being treated as a matter of serious concern. “An investigation has been launched by @PoliceMv into the incident that happened this morning at Galolhu stadium. “This is being treated as a matter of serious concern and those responsible will be swiftly brought before the law,” he said in a tweet. The ruling Maldivian Democratic Party (MMDP) has unequivocally condemned Tuesday morning’s violent attack on the event celebrating World Yoga Day held at the National Stadium. “These types of egregious and violent acts have no place in a peaceful democratic society such as ours.

We welcome the government’s decision to launch a serious investigation into the matter and applaud the prompt actions taken thus far including the arrests.” “The MDP hopes that the process of justice is swift for those responsible. We would also like to note that World Yoga Day has been celebrated in this country since 2015,” it said. Islamist religious organization ‘Ilmuveringe Gulhun’ comprising of religious scholars had sent a letter to the Islamic Ministry on Monday expressing their concerns regarding the celebration of International Yoga Day in the Maldives, which they said is a “practice closely associated with Hindu religion”. The letter read that “yoga was a threat to Islam and the Maldivian constitution in the name of exercise”. It also requested the Ministry to stop the event. The ‘International Yoga Day’ event was initially to be held at Rasfannu area. However, the Male’ City Council decided to cancel the permit issued to hold the event at Rasfannu following complaints from the public. Expressing concern over the incident – Maldivian Youth Minister Ahmed Mahloof said that the event was “obstructed for political reasons”. Minister Mahloof said that ‘Yoga Day’ has been celebrated in the Maldives since 2014 – with major public events being held to mark the day during the earlier dispensation under President Abdulla Yameen as well. He added that there is no reason for something that was not considered ‘haram’ back then to become ‘haram’ now. He also stressed that yoga was not a religious activity.

He also alleged the storming of the event was backed by senior officials from the Progressive Party of Maldives (PPM) and the Jamiyyath Salaf was also behind the violence. However, both the parties have denied the allegations. He described today’s incident as a lowly act which unfolded in front of senior officials from foreign countries. The Ilmuveringe Gulhun organisation, in their letter to the Ministry of Islamic Affairs on Monday, said: “We believe that yoga is a dangerous thing against Islam and the Maldivian Constitution under the name of exercise. This is concerning.” The letter also said that the ministry needs to initiate advocating and creating awareness about the religious implications of yoga. Many have alleged that the flags which the rioters were used this morning were the same flags used in PPM’s recent ‘My prophet’ rally. A photo showing the flags being allegedly carried out of the PPM’s office has gone viral on social media as well. Police said that preliminary investigative findings showed some of the items used by rioters came from the PPM office. “The information collected so far establishes that some the items used by some of those involved in this incident were taken from the office of the Progressive Party of Maldives (PPM),” said the police. Police said they would also look into what caused the incident, and conduct an internal review of the police response to it. Those with evidence or information pertaining to the incident have been asked to submit it to the web portal set up for case tips. PPM has meanwhile issued a statement condemning the incident.

Dilli Bazaar portal to go live in Dec with 10,000 vendors on site: Govt