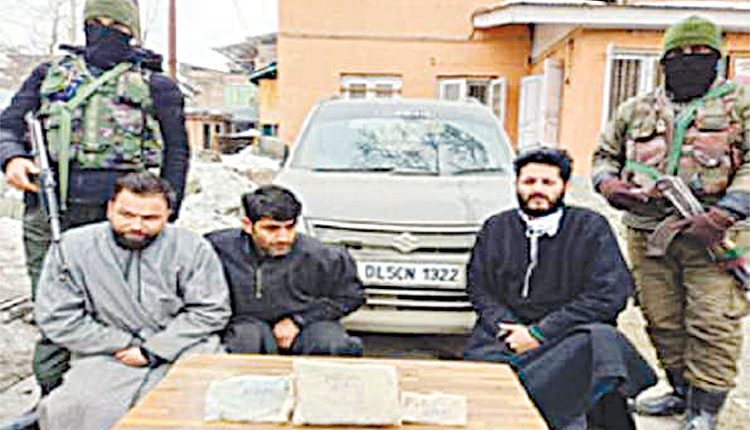 Srinagar, Aug 2 (Agency) Jammu and Kashmir police arrested three drug peddlers, including two residents of Punjab, in the valley, a police spokesman said Monday evening. He said a police party from Post Post (PP) Mirbazar on Srinagar-Jammu national highway intercepted a vehicle. During the search of the vehicle, police recovered one kg of poppy straw. The driver of the vehicle identified as Diljeet Singh, resident of Simbal Jammu was arrested. The vehicle has also been seized and further investigation was taken up. Similarly in Budgam, police established a checkpoint at Shiekhpora Budgam during which two persons roaming in suspicious conditions carrying some bags were intercepted.

They have been identified as Sajan Kumar, a resident of Ludhiana, and Gurjant Singh, a resident of Ferozpur in Punjab. During checking, police recovered 2 kgs of poppy straw concealed in bags from their possession. They have been arrested and further investigation was taken up. Accordingly, cases under relevant sections of the law have been registered in respective Police Stations and further investigations have been initiated. Community members are requested to come forward with any information regarding drug peddlers in their neighbourhood. Persons found indulging in drug peddling will be dealt with as per law. Our consistent actions against drug peddlers should reassure the community members that we are making efforts to keep our society free from the scourge of the drug menace.