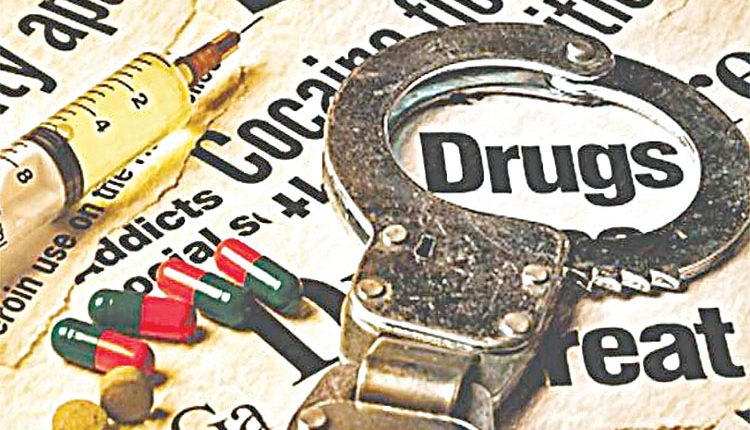 Hoshiarpur, Jul 7 (Agency) Acting on the leads provided by the 4 Afghan nationals, recently arrested bby the police from Forest Lane Sainik Farm, Neb Sarai-1, Delhi, following the alleged seizure of 17 Kg Heroin along with lab equipment and assorted chemicals used to manufacture the drug, the district police, Hoshiarpur, has succeeded in arresting 6 more accused part of this international drug racket. Police seized 3.2 Kg heroin and Rs 41.12 lakh drug money from them. SSP Navjot Singh Mahal said in a press conference here this afternoon that as per the disclosures made by 4 Afghan nationals, two separate teams had been constituted to arrest more antisocial persons involved in this international drug trade. A team headed by SP (Inv.) Ravinderpal Singh Sandhu arrested Kishan Lal from Delhi and allegedly recovered Rs 10.20 lakh drug money, 2 mobile phones from him. Another accused Abhay Pratap Singh was arrested from Shastri Nagar, Ghaziabad and a Mobile phone was recovered from him. During preliminary investigation accused Abhay revealed that as per alleged instructions of Kishan Lal he had allegedly received Rs 80 lakh drug money on July 1, 2021 from one Imtiaz of Rampur in Uttar Pradesh.

He disclosed that Rs 10.20 lakh recovered from Kishan Lal was part of Rs 80 lakh drug money, revelation of which was made by Abhay during his preliminary interrogation. The second team headed by SP Mandeep Singh and ASP Tushar Gupta arrested Imtiaz Ahmad and Imran from Rampur (UP). Police seized 250gms Heroin each from them. Besides, police also recovered Rs 12 lakh drug money from Imtiaz Ahmad. As per the disclosures made by Imtiaz Ahmad during preliminary interrogation, Jasvir Singh and Balwinder Singh both of Sheikhupura in Jandiala Guru were arrested from Haridwar in Uttrakhand and police recovered 2.7kg Heroin, Rs 17.92 lakh drug money, A Swift car from them.

Mr Mahal said that Jasvir Singh had been absconding in FIR registered against him in Model Town police station here on May 18, 2021 in which 600gms Heroin, 600gms opium, 500gms Gold and Rs 50 lakh drug money had been recovered from his wife. He said that the number of accused arrested in entire operation has now reached 12. Two accused namely Sarabjit Singh and Gagandeep Singh had already been arrested in July 1, 2021. After the recovery of 3.2kg heroin and drug money from them, the total recovery had reached 20.7kg Heroin, Rs 40.12 lakh drug money and 2 cars, added that further interrogation of all the accused is being done.