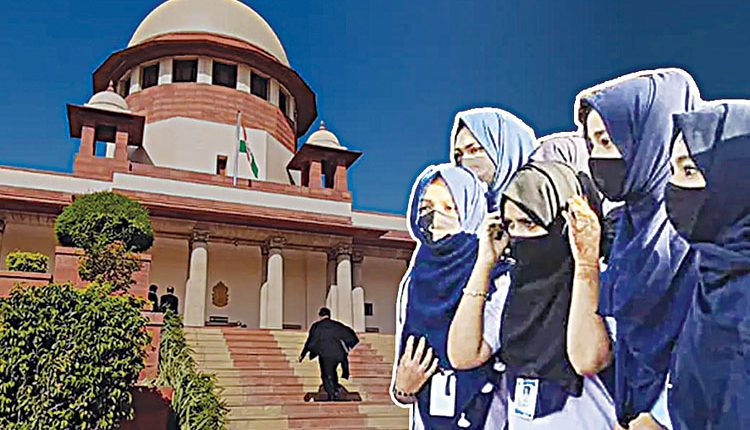 New Delhi, Oct 13 (Bureau) A two-judge bench of the Supreme Court on Thursday delivered a split verdict in the Hijab ban case, and referred the matter to the Chief Justice’s (CJI) court for his direction to constitute a larger bench to decide the issue.The bench of Justices Hemant Gupta and Sudhanshu Dhulia delivered the verdict on a batch of appeals against the Karnataka High Court judgment upholding the hijab ban in educational institutions.”We have divergent of opinion, I have framed 11 questions on the issue,” Justice Hemant Gupta who led the bench said in hiss verdict.While dismissing the batch of appeals filed by many students, Justice Gupta affirmed the high court’s order on the hijab ban and said, “the matter be sent to the CJI for constituting a larger bench to hear the case.”The two-judge bench on September 26, had reserved its order, after hearing from all the parties — 23 petitioners, their lawyers, and the Karnataka government for a marathon 10 days.The apex court pronounced the verdict on 23 petitions, including that of, Aishat Shifa, and others.

The state government has argued in the Supreme Court that it had the authority to issue an order to educational institutions to follow the discipline of wearing the prescribed school uniforms.Senior advocate Dushyant Dave, appearing for the students/ petitioners, argued that fundamental rights, freedom to choose to what to wear and freedom of faith would not diminish inside a classroom.The lawyers for the students — Devadatt Kamat, Dr Rajeev Dhavan amd Dishyant Dave — submitted in the top court that the Karnataka State government had not presented even a single shred of evidence to support their claim that a few students wearing hijab to their classrooms in addition to their respective uniforms violated public order, health and morality.The lawyers further said that the Karnataka government had not provide any material to support their claim that wearing hijab infringed on the fundamental rights of other students.

A Full Bench of the Karnataka High Court comprising Chief Justice Ritu Raj Awasthi, Justice Krishna Dixit and Justice J M Khazi, in their judgement on March 15, this year, held that wearing of hijab by women was not an essential religious practice of Islam.The high courts’s three-judge bench, had dismissed the petitions filed by a group of Muslim girl students against PU government college for denying them entry while wearing Hijab.The led by Chief Justice Awasthi dismissed the petition stating that the practice of hijab is not an essential practice under islam and thus does not fall within the ambit of Article 25 of the Constitution of India.The High court had also held that prescription of school uniform is only a reasonable restriction which is constitutionally permissible which the students cannot object to and stated that the government had the power to issue such notification and that no case was made out against the government notification.