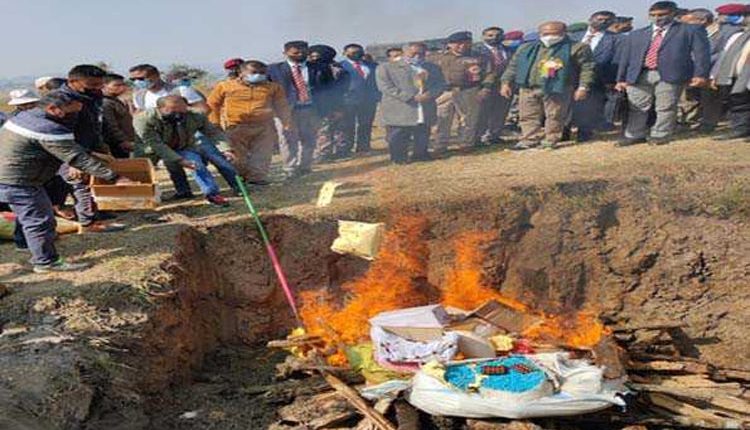 The contraband items, which were consigned to flames today, were Heroin powder (2 kg 271 gm 535 mg), Ganja (273 kg 87 gm), 5,80,853 WY tablets, 1,22,696 SP capsules and 530 N-10 tablets. These were seized by NAB, Thoubal, Bishnupur, Noney, Senapati, Imphal West and Imphal East district police. N. Biren Singh said that the Government would terminate the service if anybody from the Manipur Police Department is found guilty in drug and psychotropic substance-related cases no matter he or she is a relative or a family member. He informed that around 40 departmental enquiries involving police personnel regarding drug-related cases are going on. The Chief Minister asserted that for him, ‘War on Drugs’ is not an idea which is conceptualised recently. He began to feel the need of commencing an effective campaign against intoxicants in the mid-90s when he was the Editor of a vernacular daily, N. Biren Singh said. After he became the Chief Minister of Manipur, N. Biren Singh said, he announced to begin ‘War in Drugs’ in 2018 on International Day Against Drug Abuse and Illicit Trafficking, which falls on June 26.

The Chief Minister asserted that it is a committed mission of the present Government and nobody can derail it with unfounded criticisms and politically motivated instigations. Urging different organisations to come up with a sincere mind in this regard, he said that the Government would consider all the valid points and suggestions. He said that instead of making fun of the mission, the Government’s efforts should be acknowledged. The Chief Minister stated that travelling to most interior areas hiking difficult terrains to destroy poppy plants and convincing villagers to grow alternative cash crops in place of poppy is not an easy task. It needs efforts guided by true conviction, the Chief Minister said. In this regard, he lauded NAB, Manipur Police, Paramilitary forces and all those involved in the War on Drugs. The Chief Minister said that the destruction of poppy farms would continue until villagers stop growing it. Regarding daylight robbery of cash and jewellery at Ningombam Lamkhai near Bir Tikendrajit International Airport a few days back, the Chief Minister said that culprits involved in the incident had been nabbed, and investigations are going on.