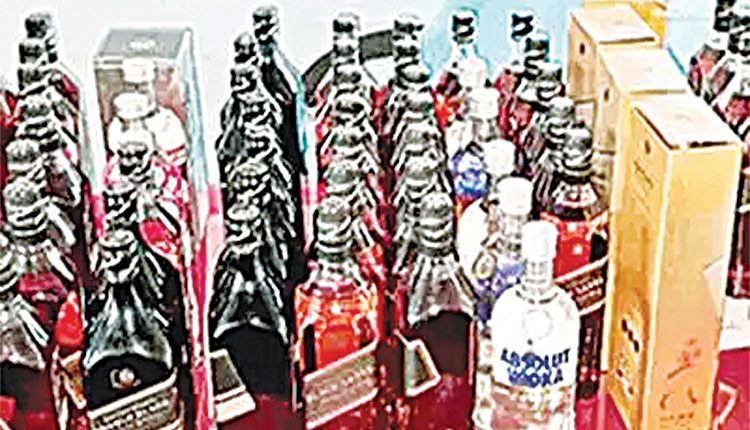 Kakinada, May 30 (Agency) A racket involved in preparing and selling adulterated liquor in government out let in Dowlesweram in Rajahmundry urban police limits has been successfully busted by the special enforcement bureau headed by additional SP Dr Sumit Garud with the arresting of a six member gang on Saturday, police sources said. The gang has chosen the government outlet for carrying on their business enlisting the support of government outlet supervisor and salesman.

`The gang was operating from the last three months making the Dowlesweram outlet as the base .Initially they extended the operation to two other government liquor shops but stopped the same since past one month fearing complications. The modus operandi was that soon after receiving the IML stock from the depot ,they remove the sealed caps of the bottles and transferring 30ml quantity to another empty bottle and filling the gap with water in the original bottle and then refixing the seal with cap. Used empty bottles after cleaning filled with the stolen 30 ml liquor and water and fake lebels were fixed .

The caps were purchased from the market and labels were printed by special colour printer. All the adulterated liquor bottles along with original bottles were sold from government outlets. Most of the fake labeled bottles were supplied to belt shops ’the sources said. Interestingly , only cheap liquor brands were selected to avoid scrutiny from the customers. Among the six member gang, Doodi Jogeswerarao and Chadram Govindu are stated to be the king pins while the government shop supervisor Anala Satish, Dasari Durga Lakshmi kumar , Mylapalli Nagaraju and Kolati venkatesh are the workers. The SEB officials are happy to note that only water was used to adulterate the liquor instead of sanitizers rectified spirit and methanol which are deadlier.