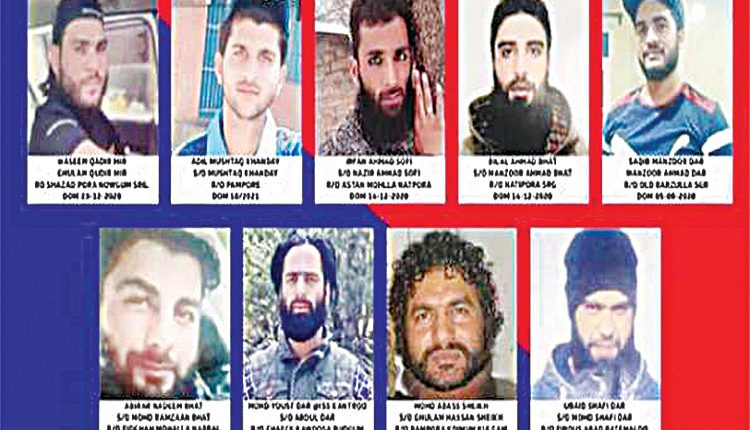 Srinagar, Mar 14 (Agency) Jammu and Kashmir Police has released a list of nine wanted militants active in and around the summer capital, Srinagar, announcing reward for anyone giving information about them. The list of name of the militants along with their photographs and other details were released by the police on the official twitter handle of Kashmir Zone Police. The militants named in the list include Waseem Qadir Mir, Shahid Khursheed, Irfan Ahmed Sofi, Bilal Ahmed Bhat, Saqib Mansoor Dar, Abirar Nadeem Bhat, Muhammad Yousuf Dar alias Iss Kantroo, Muhammad Abbas Sheikh and Ubaid Shafi Dar. Of these, seven are from Srinagar, mostly from uptown, while one is from Budgam and another from Kulgam.

One of these militants has joined the ranks in 2021 and six in 2020 while the three others have been active for several years now. The police have also shared several mobile phone and landline numbers on which information about these militants can be given. The informers have been promised suitable rewards. Inspector General of Police (IGP), Kashmir, Vijay Kumar earlier this week said that militants have changed their modus operandi from attack on naka parties to carrying out IED attacks. He further said that security forces are redrawing their Standard Operating Procedures (SOPs) as there is a possibility that ‘sticky bombs’ have been smuggled into the valley.