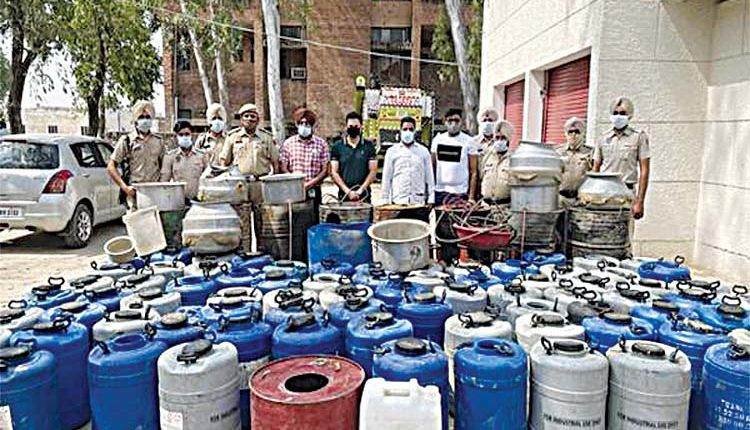 Chandigarh/Amritsar, May 2 (Representative) Adopting a zero tolerance approach towards bootlegging, the Amritsar Rural Police has busted an illicit liquor manufacturing unit at village Boparai Khurd in Lopoke here on the intervening night of Saturday and Sunday. The police also arrested of five persons during a raid. The arrested persons have been identified as Sarwan Singh, Angrez Singh, Sanjay, Avtar Singh and Resham Singh, all residents of village Boparai Khurd in Lopoke. The Police also recovered 1,18,400 kgs Lahan (raw material used for making liquor), 390 litres illicit liquor, eight working stills, 94 drums (50 litres each), four gas cylinders and 20 tarpaulins from their possession.

Notably, this is the seventh such illegal liquor manufacturing unit busted by the Amritsar Rural Police in the last two months, which led to the arrest of as many as 38 bootleggers. The Police have seized 7,54,100 kgs of Lahan, 4061.25 litres illicit liquor, 57 Working Stills, 1830 Kgs of Jaggery, 297 drums, 78 Tarpaulins, 43 Gas cylinders, four water tanks, 62 cans and six motorcycles in these seven operations since March 1. Senior Superintendent of Police (SSP) Amritsar Rural Dhruv Dahiya said that based on specific intelligence inputs and meticulous recee at suspected locations, the joint police teams from Amritsar Rural carried out a six hour long operation in the area, which led to the unearthing of the illicit liquor manufacturing unit. The police teams were led by ASP Majitha Abhimanyu Rana, DSP Detective Gurinder Nagra, DSP Special Branch Sukhraj Singh and DSP Attari Gurpartap Singh Sahota, he added.

SSP Dahiya said that besides undertaking the detailed geographical mapping exercise of the production and supply chains of all the illicit liquor units busted so far, the Police are also scrutinising the assets of the accused persons to establish their network of financial flows. “Preliminary investigations indicate that the accused persons had established a sophisticated and semi – mechanised scale of production of illicit liquor, which is based on sourcing of raw materials like jaggery from within the village, and is sustained by extensive illicit distribution chains radiating from outside the focal ‘hot spot’ village,” he said. The SSP said that the Police were investigating the case from various angles and more such illegal liquor making units are expected to be unearthed soon. Meanwhile, the case has been registered under sections 61, 78 (2), 1 and 14 of the Excise Act at Police Station Lopoke and the process to forfeit the properties of the accused persons, as per the legal provisions is underway.