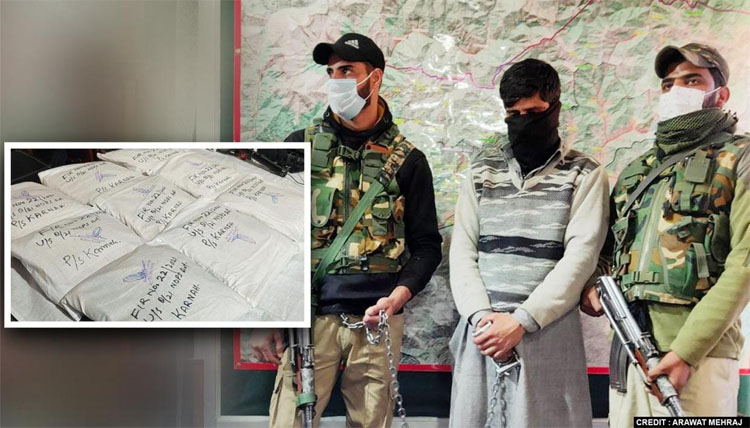 Kupwara, Apr 8 (Agency) Police on Thursday claimed to have busted a Pakistani sponsored narco-terror module by recovering heroin worth Rs 60 crore and arresting a militant associate in the border town of Karnah in north Kashmir district of Kupwara.
Meanwhile, a Special Investigation Team (SIT) has been constituted in Kupwara to ascertain the details of accused involved with militant outfits, radicals, smugglers and other anti-national elements. ‘Following specific information about transportation of drugs, police arrested a militant associate, identified as Mukhtar Husain Shah, a resident of Panjtaran Karnah, in the border district,’ SSP Kupwara Sandeep Chakrabarti told reporters during a press conference on Thursday.
He said incriminating material, including 9 kgs of heroin (worth 60 crore in international market) were recovered from his possession. ‘The other persons involved in the crime have been identified and efforts are being taken to arrest them,’ he said. Mr Chakrabarti said the module was in close connection with Pakistan based handlers and were involved in drug trade and giving financial assistance to active militants of the valley. ‘The recoveries also exposed the inter connection between drug dealers and militancy,’ he said.

He said the module was working to strengthen militant activities in the valley and were misguiding and motivating the local youth of Kashmir to join militant ranks. ‘A case under relevant sections of law has been registered at Police Station Karnah and investigation has been taken up,’ he said.

He said a special investigation Team (SIT) has been constituted to ascertain the details of accused’s ties with militant outfits, radicals, smugglers and other anti-national elements. ‘Police once again appeals to the people of the district to come forward with the information regarding drug peddlers and smugglers so that the curative steps can be taken against them,’ he added.