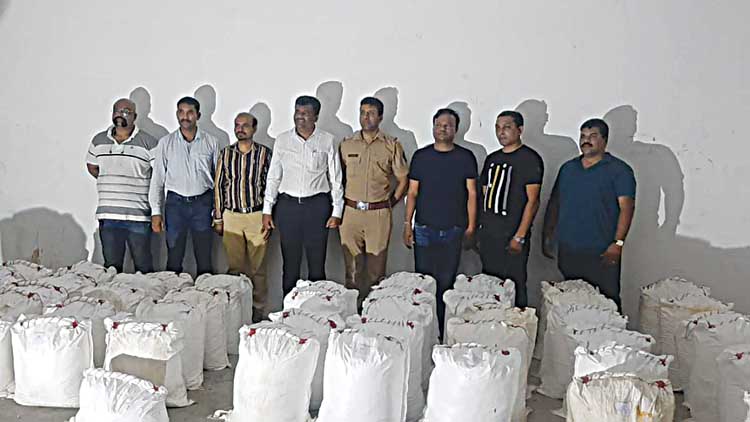 Mumbai, Aug 16 (Agency) The Anti-Narcotics Cell of city police has seized 513 kg of mephedrone (MD) drugs worth Rs 1,026 crore from a manufacturing unit in Bharuch district of Gujarat and arrested seven people including a woman in this connection. Earlier, on March 29, the Worli unit of ANC had seized the consignment of MD drugs worth Rs 4.5 crore and arrested two people from Shivaji Nagar area of ​​Mumbai on charge of alleged drug smuggling. Since then, the ANC was trying to trace its source, said police. Subsequently, the ANC seized 701 kg of MD drugs worth Rs 1,403 crore from Nalasopara (outskirts of Mumbai) in Palghar district on August three and arrested five people, including a woman, in this case.

Later, the ANC busted a drugs-making factory in Ankleshwar of ​​Bharuch district in Gujarat and recovered around 513 kg of MD drugs worth Rs 1,026 crore in the international market. One of the arrested accused was a chemistry graduate who knew how to prepare mephedrone and contacted the customers through social media. This gang especially targeted the youth from high-profile circles. A case was registered under the Narcotic Drugs and Psychotropic Substances Act against all the accused. While five members of the gang have been sent to judicial custody, two others are in the ANC custody, sources added. Police believe that this is a large interstate drug smugglers gang, which is spread across several states.