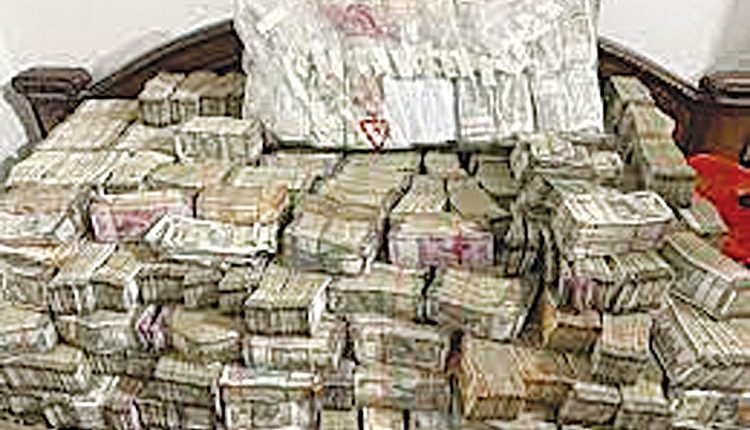 Kolkata, Oct 18 (Bureau) In yet another recovery of hard currencies, cash worth over Rs 8 crore and huge amounts of gold and diamond ornaments have been unearthed from a car and a flat in Howrah by the Kolkata Police during an investigation of a suspicious bank account case, official source said on Monday. The owner of the flat and car, identified as Sailesh Pandey, a Chartered Accountant by profession, is evading arrest since the Anti-Bank Fraud wing of the city police began searching for the fleeing man and his possible hideouts where he kept the hard currencies in box cots in his Howrah flat.Sources said the Kolkata Police sleuths, along with Howrha’s Shibpur Police station, in search of Sailesh Pandey at his Mandirtala flat on Saturday night found his car parked near his flat in which around two crore cash and huge jewellery have been recovered.

The car belongs to the accused brother Arvind Pandey. Later the search party broke open Shailesh Pandy flat in which hard currencies of Rs 500 denomination were found stacked, worth over Rs 6.15 crore. Eye witnesses said altogether three box cots were in the flat in separate rooms from which thecash was recovered.Sources said the police also with the held of different banks have sealed the accounts of Sailesh Pandey, were opened in different names and the introducer was the Chartered Accountant. Police said while they were investigating a complaint, which was lodged by Canara Bank afterfinding doubtful transactions of a particular savings account and lodged the complaint of fraudulent activity at Lalbazar police station.The case was registered at Hare Street police station and the anti bank wing of the police department began investigation. During the probe police came to know that the accused had opened two accounts with Canara Bank at its Narendrapur Branch with fame documents pertaining to one address at 16 Strand Road in the city in the name of two companies and made huge online transactions.