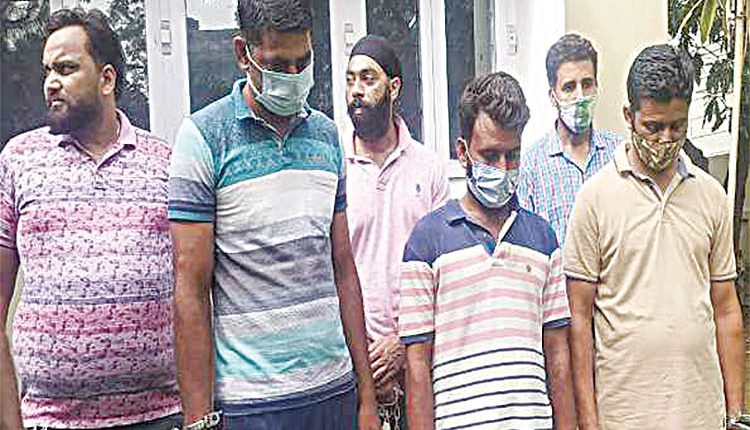 Jammu, Jul 22 (Agency) Seulth of Jammu and Kashmir Anti Narcotics Force (ANTF) on Thursday claimed to have cracked cross border smuggling racket with the arrest of three persons including one ex-serviceman. However, heroin worth Rs 14 crores was recovered from the possessions of arrested smugglers. “The ANTF team on July 19, from reliable inputs received information regarding smuggling of heroin from Khour to Akhnoor in a two wheeler,” Vinay Sharma, Senior Superintendent of Police, J&K ANTF, here told reporters at a press conference. He was flanked by Inspectors Sunil Jasrotia and Ankush Sharma. The SSP said, “our teams swung into action and laid surprise check points,” adding, “one two wheeler (scooty) was intercepted and during search, one packet of heroin bearing 777 mark, which indicates cross border links, was recovered.”

The top cop said that the rider namely Naresh Kumar alias Kurkaa of village Mangiyal Avtara, Khour, Jammu was arrested on the spot. “During questioning, arrested person also revealed names of two of his associates dealing with cross border smuggling and have concealed one more packet of heroin somewhere close to an international border,” Sharma said. He said that two persons identified as Kamal Singh alias Kali of Rishi Colony, Khour and Balbir Singh alias Kala (ex-serviceman), also of Khour, were also detained on the disclosure. During series of raids both the suspects were detained and put to sustained questioning and they admitted that a packet of heroin was concealed near the international border. “They were taken to the spot at Border Garar Khour while Army was also taken ob board and another packet with 777 mark of one-kg heroin was recovered,” the SSP said. “On further interrogation the accused persons revealed the modus operandi of the cross border drug smugglers where in they disclosed that the Pakistan drug dealers throw the consignment towards Indian side and was supposed to be lifted by the accused persons,” he said.

IT raids at newspaper group’s premises