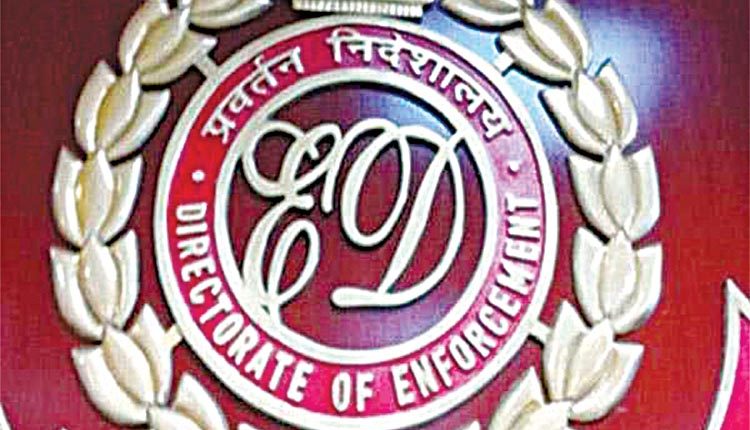 New Delhi, Mar 30 (Agency) Enforcement Directorate (ED) on Tuesday said that it has attached movable and immovable properties worth over Rs 8,18,45,005 of owner of Vaibhav Enterprises Arun Kumar Agrawal and his other associated companies. This attachment includes 14 bank accounts having balance worth Rs 1,10,33,925 and seven immovable assets worth Rs 7,08,11,080, including residential and commercial properties situated at Jaipur and Udaipur, ED officials said. The central financial probe agency initiated investigation on the basis of multiple FIRs registered by Rajasthan Police against Arun Kumar Agrawal and his associated firm, companies, persons. Agrawal, in collusion with other associated persons and family members, has conspired to float the above mentioned company firm wherein the general public was allured to invest in his companies and these investors were being promised that they would be given benefits as 9 percent to 18 percent as interest and sometimes even 24 percent per annum payable on monthly basis, the officials said. During money laundering investigation, it was noticed that Arun Agrawal, proprietor of Vaibhav Enterprises was associated with Aetrio Real Corp Pvt Ltd, Vaibhav Hugemovers Pvt Ltd, Techradius High Tech Pvt Ltd, Routevisor Logistics Pvt Ltd, Truvic Capital Pvt Ltd and Vaibhav Nidhi India Pvt Ltd as Director with his main partner Amit Gautam and his brother Neeraj Agarwal.

The officials in the ED said that numerous bank accounts were opened by the accused person in the name of above firms, companies and associated persons and the money have been transferred to each other bank accounts for layering of funds. “The entries in the bank accounts were thoroughly scrutinized and examined, revealed the siphoning of fund which was acquired in the form of investments from gullible investors and subsequently parked them as investment in different properties”, the officials said. Information was sought from different banks, Registration authorities, ROC, Income Tax departments, Police, RTOs which revealed that funding to the said companies were made from the bank accounts of Vaibhav Enterprises and most of said companies started to disguise the investors to show the various business, however, most of the companies were in loss and no actual work were being done there, they added.

Further, it was found that the investor’s money was used for the personal purposes by purchasing luxurious cars, purchasing of jewellery, foreign tours and business of beauty parlour and to maintain luxurious life style, the officials said. “Arun Kumar Agrawal, Amit Kumar Gautam and their family members have indulged in criminal conspiracy and cheated the general public by luring them to invest in the company/ firm and thereafter, neither paid interest (as promised) nor the principal amount was returned to the gullible investors. The master plan of the investment was floated by Arun Kumar Agrawal and Amit Kumar Gautam with their associated persons”, the ED said in a statement, adding that further investigation in this case has been under progress.