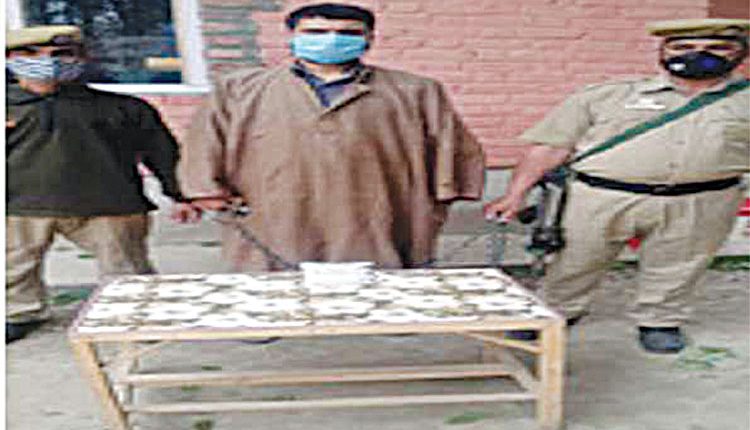 Srinagar, May 11 (Agency) Jammu and Kashmir police arrested a notorious drug peddler and recovered heroin in the frontier district of Kupwara, a police spokesman said. He said continuing its war against drug menace a Police party from Police Station (PS) Trehgam established Naka at Kawari Awoora and started checking vehicles and pedestrians. He said naka party signalled a vehicle to stop. However, a person driving the vehicle tried to escape from the spot who was tactfully apprehended. He said during preliminary questioning and search of one person identified as Ghulam Mohammad Bhat, resident of Kawari Awoora police recovered 80 grams of heroin from his possession. The vehicle has also been seized, he added.

Accordingly, legal action has been taken and case FIR No. 37/21 u/s 8/21 NDPS act has been registered in Police Station Trehgam against the accused person, and investigation has taken up. Kupwara Police has once again appealed to people of the District to come forward with the information regarding drug peddlers so that curative steps can be taken against them. Kupwara Police is committed to continuing its efforts and war to make Kupwara District drug free, he said.

‘Diversity of Languages will create opportunities for many’