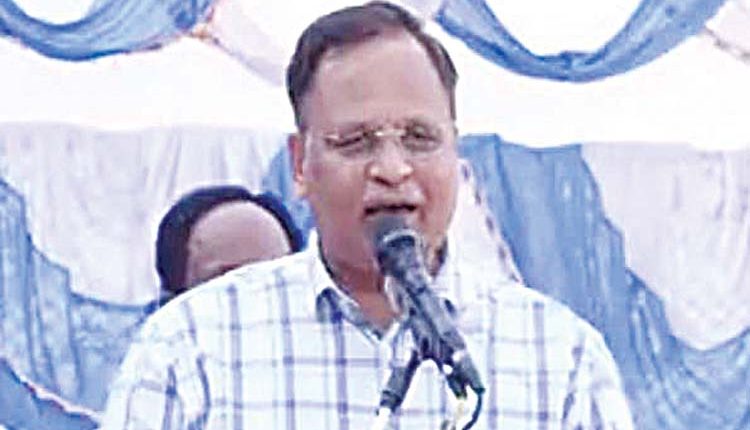 New Delhi, Nov 7 (FN Agency) A Delhi Special Court adjourned hearing on the bail application of Delhi Health Minister Satyendar Jain till November 9. He has been arrested under the provisions of Prevention Money Laundering Act. Vikas Dhull, Special Judge (PC Act) (MPs/MLAs Cases) CBI, New Delhi after hearing the part arguments on behalf of Prosecution and Defence Counsel in the bail application of Jain & others and at the request of Additional Solicitor General appearing for ED, adjourned the matter for November 9 for further arguments.

The court directed Superintendent, Tihar Jail to produce accused Satyendar Kumar Jain, Vaibhav Jain and Ankush Jain from JC through VC on 09.11.2022. Government Counsel for ED informed that S.V. Raju, ASG, who is to lead arguments on the pending bail application of accused Satyendar Kumar Jain, will be able to appear at 3 p.m., which was not opposed by counsels for accused persons. Counsel for Jain has submitted in the bail application before the Court that in this matter the only fault was of Jain that he became a Minister and got into public life otherwise there would be no case. Government Counsel for ED opposed the bail application by submitting that Jain is not a woman, not more than 60 years of age and also not suffering from any ailment. He was shareholders in the papers but he was controlling all indirectly. Government Counsel for ED opposed the bail application by submitting that Jain served as a Health Minister in Delhi and may managed to get forged documents and can influence the doctors and Jail official. ED has submitting that if bail granted he may influence the co-accused, witnesses and other documents related to the case.

Counsel for Jain opposed the submission of ED by submitting that the submission of ED to prolong the custody of Jain. He contented that Jain is neither a Health Minister nor Jail Minister but is in jail and because the hospital where Jain was admitted under the control of Delhi Government is no ground to alleged a bias in the case. The Principal District & Sessions Court of Rouse Avenue, New Delhi on September 22 transferred the matter registered under the provisions of Prevention Money Laundering Act against Satyendar Jain from the Court of Special Judge Geetanjali Goel to Special Judge Vikash Dhull. Jain challenged the order of transfer in High Court and Apex Court and later on withdrew the same from Apex Court. Now the matter is at the stage of hearing arguments on the bail application of Jain. Investigating Agency has arrested Satyendar Jain in this Matter on May 30 under the violations of provisions of PMLA and he is now in the judicial custody at Tihar. Central Bureau of Investigation (CBI) in its chargesheet has alleged amassing assets to the tune of Rs 1.47 crore in Disproportionate Assets case while Enforcement Directorate has submitted the attachment of Rs 4.81 crore in connection with money laundering investigation.