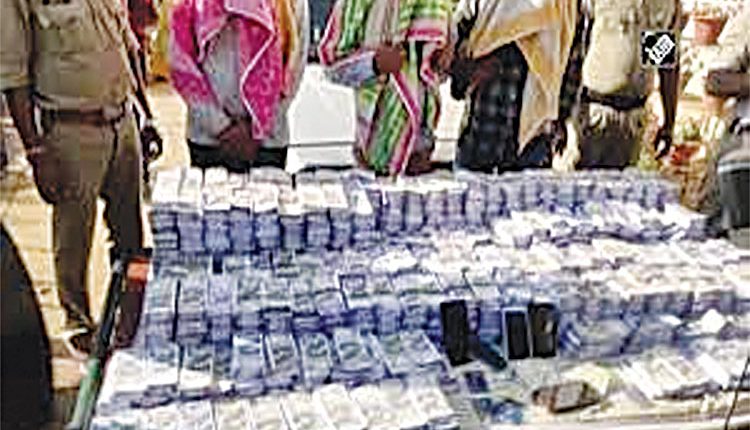 Hyderabad, Jun 24 (Agency) Rachakonda police have arrested an astrologer-cum-businessman, who lodged a burglary complaint along with six property offenders who committed the offence and seized Rs 17.72 crore worth counterfeit currency from their possession here on Wednesday. Besides cash of Rs 6.3 lakh, police also seized one car and ten cell phones from them, a police release said here on Thursday. On June 15, astrologer Bellamkonda Murali Krishna Sarma from Bandlaguda, lodged a complaint with L B Nagar police stating that there was a theft of precious stones kept in two trolley bags at his residence in Nagole. During the investigation, police analyzed the CCTV camera footage near the crime scene and identified one of the suspects as V Pawan Kumar (28), a former employee of Astrologer. Police apprehended Kumar and based on his confession, the remaining accused – D Rama Krishna (24), a driver, N.Suresh Gopi ( 25), a Businessman, Ch Vijay Kumar (27), a priest, K Suryam (25), an auto driver and Ch Nagendra Prasad Sharma (32), a private employee ( all are from Piduguralla in Guntur district of Andhra Pradesh) were arrested at GSI Bandlaguda , Nagole.

The accused confessed that they committed the burglary thinking that a huge amount of cash will be in the trolley bags but they found counterfeit currency notes of Rs 2,000 denomination. Among the accused, Nagendra Prasad is a relative of Murali Krishna Sarma and based on Prasad’s recommendation Murali- who runs gem stones sales business- employed Pawan, who observed all the movements and trade profit fund deals of Murali. Pawan thought of stealing the cash and Nagendra Prasad Sharma also agreed to it. The duo roped in other accused from their native place in Piduguralla to execute the burglary plan. After crossing Choutuppal, the six accused while fleeing to Vijayawada from Hyderabad, opened the bags hoping to find gems and diamonds. Instead, they found bundles of counterfeit currency notes of Rs 2,000 denomination along with 16 notes of genuine currency in the same denomination. The accused set ablaze the counterfeit currency at Nerketpally and fled. Based on their statement, police arrested Murali Kumar Sarma and seized Rs 17.72 crore counterfeit currency notes of Rs 2,000 denomination and Rs 6.3 lakh cash from his possession. During the investigation in the case, the police also realised that Murali was a high-profile counterfeit currency peddler. Murali had served a sentence in jail in the past in a case investigated by the CBI in which he had tried to transfer Rs 90 crore fake currencies through a bank. The burglars who were six in number were also behind the bars now.

STF arrests one for fake trading of Favipiravir in Odisha