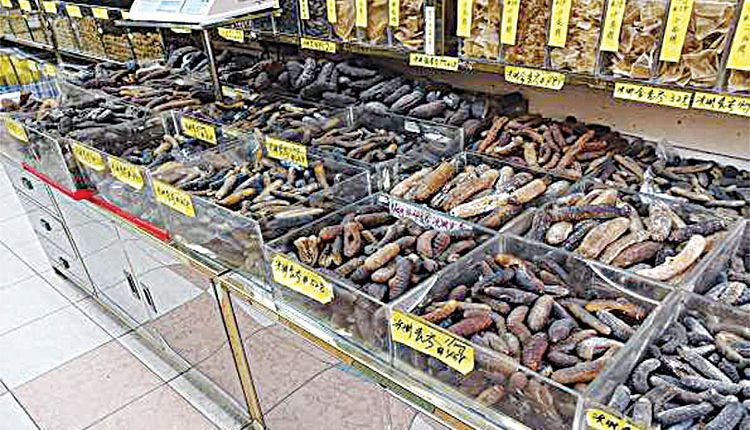 New Delhi, Apr 8 (Bureau) Sea cucumbers found in the seafloor play a critical role in marine ecosystems, cycling nutrient material. But these otherworldly animals have been prized as a delicacy in Asia for centuries, where the wealthiest would eat the creatures as a nutritious high-protein treat. But their demand has increased since the 1980s, especially in China. And so has their poaching and smuggling. Islands in and around of Lakshadweep have in recent years been witnessing the seizure of the marine animal worth crores of rupees.

Sea cucumbers, one of the ‘four treasures of Chinese Cantonese cuisine,’ is banned in India in 2001, and they are protected under Schedule I of the Indian Wildlife (Protection) Act of 1972. “By contrast, in Sri Lanka sea cucumber harvesting is permitted, but licenses are required for fishing, diving, and export. As a result, criminals frequently attempt to smuggle sea cucumbers they illegally catch in India into Sri Lanka to launder and re-export them to South East Asian markets, where they are sold for food and traditional Chinese medicine (TCM),” Dr. Teale Phelps Bondaroff, Director of Research for OceansAsia, a marine conservation organization based out of Hong Kong and dedicated to combating illegal fishing and protecting our oceans, told.

Two years ago, OceansAsia launched a large-scale project on crime in sea cucumber fisheries. As part of this project, we identified instances of sea cucumber smuggling and poaching around the world and noticed a large number in India and Sri Lanka. That was when we launched a detailed study of the subject, Dr Phelps Bondaroff said in an interview. According to Bondaroff, in combating wildlife crime, it is important that focus should be on charismatic animals. While it is vital that animals like whales, dolphins, and sharks, are protected, other, less well-known or popular species play critical roles in marine ecosystems. For example, without krill, whale conservation would be irrelevant, he said. The second reason is greed. Much of the illicit trade is driven by greed. High demand for sea cucumbers for luxury food and traditional Chinese medicine has led to increasing prices for sea cucumbers – one kilogram of a white teatfish could sell for as much as USD 400 in Hong Kong.

And the third reason is roving bandits. As populations of sea cucumbers in one area are extirpated as a result of overfishing, fishers may move to other areas, which are in turn overfished. This results in what is called serial exploitation and the individuals involved have been referred to as “roving bandits.” “My study suggested that this may be the case. By mapping the incidents, the study identified the Gulf of Mannar/Palk Bay region as a global hotspot for sea cucumber crime. However, in the past year, Lakshadweep has been the location of an increased number of smuggling and poaching incidents, showing that sea cucumber crime is expanding into this remote island chain,” he said.