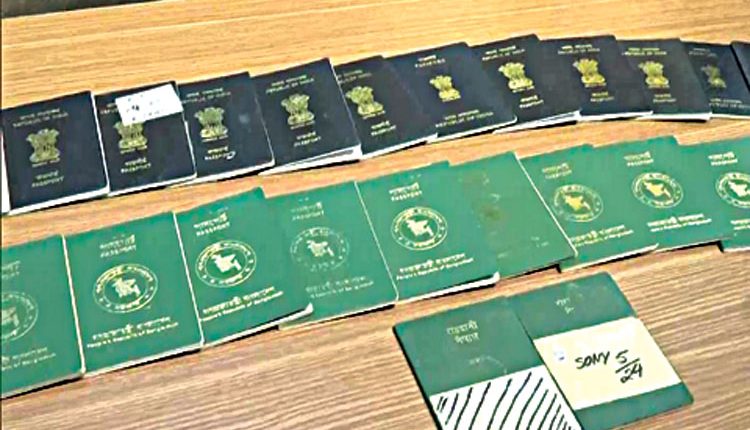 New Delhi, Sep 17 (Agency) IGI police on Friday arrested 6 persons including foreign nationals, who were allegedly involved in cheating people by preparation of forged documents. Passports of Indian, Nepal and Bangladesh were recovered from them. According to police, on September 11, passenger Sahidul Sekh travelling along with 2 other persons Shipon and Talukder, intending to board Qatar Airways flight to Doha, arrived at IGI Airport, where they were intercepted and asked to produce documents which were found fake. During interrogation, the accused disclosed their alleged involvement in the fake documents. On their instance, three more people were arrested. The accused have been identified as Fozil Rabbi Shipon (22) alias Salam Sardar of Bangladesh’s Shelet, Akhtauzzaman Talukder (54) of Shelet, Rasal (35) alias Sahidul Sekh of Bangladesh’s Chandpur, Vibhor Saini (32) of Delhi, Saurabh Ghosh (36) alias Bashir resident of North 24 Pargana in West Bengal, Fahim Khan (24) of Delhi’s Burari. During interrogation, Rasal and Shipon revealed that they met an agent Talukder in Delhi, who arranged their journey for Serbia in lieu of Rs 2,00,000 and Rs 2,50,000. He also arranged another passport in the name of Salam Sardar. A raid was conducted at the address of the agent Talukder at Sarai Kale Khan in Delhi, and 27 Passports, Indian 10, Nepali 2 and Bangladeshi 15, were recovered.

The main agent Talukder had opened two fake companies. The gang issued invitation letters on the basis of these companies, they procured fake and fraudulent visas of various countries. The cheque books issued from various banks were recovered from his residence at Sarai Kale Khan. During questioning, it was found that both the passengers and agentTalukder were in possession of both Indian as well as Bangladesh Passport. As per police, Talukderthat further disclosed that he was working as a travel agent and having his office at Sarai Kale Khan. He arranged the journey of these two Bangladeshi Nationals Shipon and Rasal. There was one another agent Bashir who was allegedly involved in the preparation and arranging of Indian Passport. In a bid to nab the remaining agents, raids were conducted at various places in Delhi-NCR and three more persons Saini, Khan and Bashir aka Sourabh Gosh were arrested. During interrogation, they revealed that Saini was instrumental in arranging the boarding of people and immigration clearance inside the Airport for Bangladeshi Nationals.

Talukder aka Uncle was the mastermind of the racket and was running an export-import company and also used to identify the persons from Nepal and Bangladesh who were willing to go to foreign countries and allured them for providing Indian Passports. After identifying the persons he used to call them to India on Medical Visa and then arranged fake documents and fraudulently obtained Indian passports for them with the help of his other co-agents and associates in lieu of large amounts of money. Over 15 Fake immigration stamps arrival or departure stamps of various countries. Indonesian Immigration, UAE Immigration, Bangladesh Immigration, New Delhi Immigration, Sri Lankan Immigration, Singapore Immigration, Australian Immigration and Malaysian Immigration were seized by police, Vikram K Porwal, DCP, IGI Airport, said.