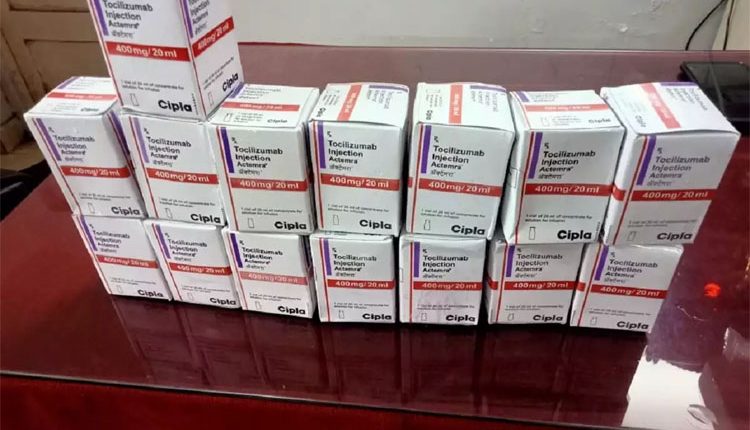 Nashik, May 6 (Agency) The Crime Branch Unit-2 arrested four people in Gangapur Road area for allegedly black marketing the Tocilizumab injection, police said on Thursday. An injection bottle has been seized from the possession of the suspects on Wednesday evening According to Gangapur police, the drugs that fall into the essential group are frequently found on the black market at inflated rates. The team of Crime Branch Unit-2 got secret information that some suspects would come to sell the injunction in black market injections outside a hospital at Gangapur road. The police squad, along with Food and Drug Administration staff, set a trap at the site of the hospital on Gangapur road. Fake customers were created and the suspects were contacted and called to the designated place.

The suspects Pranav Keshav Shinde (24, Laxmanrekha Society, Panchavati) and Sanket Ashok Sawant (25, resident of New Tejashree Apartment, Makhmalabad Naka, Panchavati) came in a Swift car. This time the fake customer demanded the injection and seized it, while the Food and Drug Administration inspectors asked the young man sitting in the car for a license to sell the drug, but he refused. Police cordoned off the car and arrested the four persons including two brothers Shubham Roundal and Akshay Roundal . Meanwhile, police found an injection worth Rs 40,600 when police search the Pranav’s body. Police have seized a car worth Rs 3 lakh, cash worth Rs 8,000 and an expensive mobile phone worth total Rs 4 lakh. According to the complaint of drug inspector Suresh Sahebrao Deshmukh (45), a case was registered at Gangapur police station.