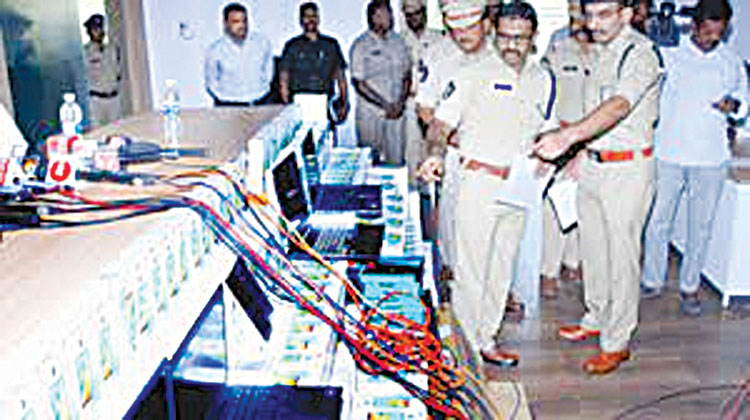 Kadapa, Nov 8 (Representative) The police have arrested two inter-state robbers and recovered property, including laptops and mobile phones, worth more than Rs 1.68 crore. Informing this to the media here on Tuesday, Superintendent of Police KKN Anburajan said that on October 19 a container lorry bearing No. HR38-Y-3224 carrying consignment of Mobile Phones, Laptops and other valuable electronic gadgets belongs to Bluedart Company, started from Bilaspur in Haryana and bound for Chennai. It was driven by one Juber, and Wasim was his helper. On October 23 the container lorry reached the warehouse, Blue Dart Express Limited in Medchal, Hyderabad. There it was loaded with some more consignments and proceeded to Chennai. In the Middle of the way, at the service road, near Gudipadu village of Duvvur Mandal of YSR Kadapa district, the accused stopped the vehicle broke open the locks of the container lorry and stolen the Mobile Phones, Laptops and other valuable electronic gadgets worth Rs. 1,68,58, 671 and decamped with the booty.

On October 30 on the report of Yadavakunta Siva Prasad Reddy, Senior Security Executive at Blue Dart Express Limited, Hyderabad, a case was registered. Special teams were formed to detect the case who examined the CCTV footage and got a valuable lead. Meanwhile, the accused shifted the booty through an Innova car and another vehicle. On reliable information about the accused and case property today, the police team conducted vehicle checking, intercepted the vehicles — Innova bearing and Audi Car which was proceeding towards Hyderabad side with the accused and the stolen property, at Old Toll gate, Near Irocon circle, Kadapa city and seized the booty and two cars. The arrested accused confessed that six other accused also participated in the offence along with them. Special Teams are on the job to nab the remaining offenders. The police gave the names of arrested interstate robbers as Salman Mansoor Ahamed and Mohammad Rehaman Shareef. Police recovered 1, 557 Redmi Mobile Phones, 3 Apple iPhone14, 5 Laptops, 193 Bluetooth earphones, 2 cars-Innova bearing and Audi.