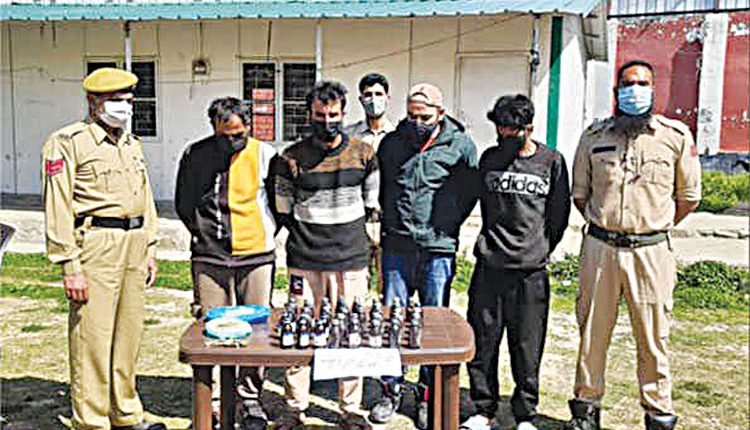 Srinagar, Jul 17 (Agency) Police on Saturday arrested 11 drug peddlers, including a resident of Punjab, and recovered huge cache of contraband from them in twin south Kashmir districts of Anantnag and Kulgam. A police spokesperson said that following specific information about transportation of drugs, a checkpoint was established at Larkipora in Anantnag. “Police intercepted two persons, identified as Bashir Ahmed Mir and Zahoor Ahmed Shah, at the checkpoint and during checking recovered 400 grams of Charas and 5 grams of Heroin from them,” he said. He said the accused were immediately taken into custody.

In another incident, two drug peddlers, identified as Mohammad Arshad Sofi and Mohammad Ismail Sofi, were intercepted by a police party at Sakras crossing in Anantnag. “During search, police was able to recover 900 grams of Charas from their possession. The accused were arrested,” he said. He said a checkpoint was established near Petrol Pump Qaimoh in Kulgam by a police party following inputs about drug trafficking. “Police intercepted a vehicle at the checkpoint and curing checking recovered 10 kgs of Poppy Straw and 5 grams of Heroin,” he said, adding five people onboard the vehicle were taken into custody. He said the accused have been identified as Nafees Hussain, Mohammad Yawar, Zahid Rafeeq, and Imtiyaz Ahmad Machlo,” he said.

He said two more persons, identified as Mohammad Abbas Bhat and Sukhvinder Singh were arrested at separate checkpoints in Kulgam. “340 gram of Charas was recovered from Bhat while as 10 kg of poppy straw was recovered from Singh, a resident of Jalander Punjab,” he said. He said cases under relevant sections of law have been registered at respective Police Stations and further investigations have been initiated. “Community members are requested to come forward with any information regarding drug peddlers in their neighbourhood. Persons found indulging in drug peddling will be dealt as per law. Our consistent actions against drug peddlers should reassure the community members that we are making efforts to keep our society free from the scourge of drug menace,” he added.