‘Working of PSBs has to be improved to defeat privatisation’ 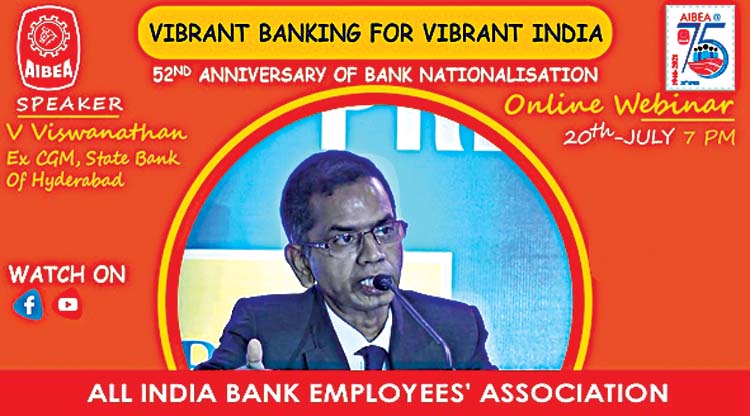 Hyderabad, Jul 21 (Mayank Nigam) Former Chief General Manager of State Bank of Hyderabad (SBH) V Viswanathan has felt that in order to defeat privatisation of Public Sector Banks (PSBs), as contemplated by the Centre, the working of the banks has to be improved. Speaking on the topic ”Is profitability the only criteria to judge a PSB ?, on the 20th day of the month-long AIBEA National Webinars to commemorate the 52nd anniversary of Bank Nationalisation on theme ‘Vibrant Banking for Vibrant India’ and focus ‘people’s money for people’s Welfare’, on Tuesday night, he said during the time of COVID pandemic in last year, PSBS did their best as frontline warriors and government schemes have been implemented through it.

Elaborating on what was the core objective when the Nationalisation of Banks took place, Mr Viswanathan said it was that the banking was not reaching the masses and we should reach the nook and corner of the country. ATMs were unheard of when the banks were Nationalised, he added. The former CGM said it was around 8000 branches in 1969 when banks were Nationalised, but it is now more than 1.6 lakh branches. Even now in many villages there are no branches. Business Correspondents numbering around 5 lakh are catering to the needs of the people in villages and hamlets, he said. Agriculture loan is around Rs.12 lakh crore as of now and major portions are from the public sector banks.

Mr Viswanathan said even in respect of branches, the private banks have not expanded more in rural and semi-urban branches. PM Garib Kalyan Yojana were possible only because of PMJDY. In Demonetisation, 15.33 lakh crore have been exchanged in the period and the majority exchange was only done by the public sector banks, the SBH former CGM reminded and said in the agriculture, private sector has been concentrating on Microfinance and Self-Help Groups where the rate of interest is more than 13-15%. He said If PSBs are privatised, there will be rationalization of branches and the branches in rural and semi-urban areas will be closed down and added that Yes Bank, ICICI Bank, Lakshmi Vilas Bank debacle in the recent times highlights very clearly about the efficiency of private sector. Mr Viswanathan said the BJP-led NDA government is planning to privatise the public sector units and banks because of the fiscal deficit. Stating the selling of IDBI Bank would be making a loss to the LIC as the latter bought shares from the former, he said with the sale of the public sector units and banks, the government will not be able to reach the disinvestment target of Rs.1.75 lakh crore.

He asked why the Centre have not tapped the market by selling the shares of the public sector banks upto 51%. From 2000, no capital was promptly introduced till last 3 years. Rs.3.16 lakh crore were brought into banks’ capital through recapitalization bond in the last 3 years only to get the banks out of prompt corrective action. The government should have helped the banks by adequately capitalizing the banks over the years since 2000. When the banks started making losses because of bad loans’ provisions, government started giving recapitalization bonds. Because of this, the net NPAs got reduced but the Gross NPA did not. The delay legal process has stopped the banks from recovering the bad loans. The legal process has helped the banks to evergreen the balance sheet, he said. Mr Viswanathan said the NDA government instead of privatizing the public sector banks, if they could go for follow-on public issue, rights issue, it will be what is needed to continue the public sector character of the banks and utilizing them for the social objective.

IMF-World Bank annual meeting to be conducted in hybrid format