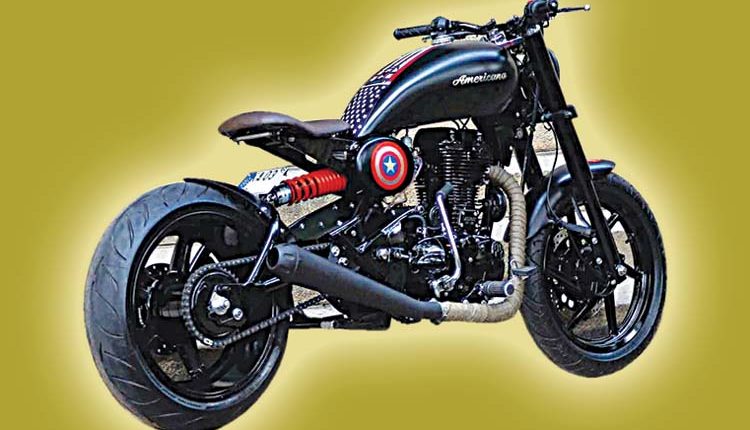 The only thing better than a classy Royal Enfield motorcycle is a superhero theme modification of the two-wheeler. A Bengaluru based modification house that goes by the name of Bulleteer Customs has modified a Royal Enfield and has named it Americana. The modified two-wheeler is clearly a dream bike for all Captain America fans as one can easily spot the logo on the motorcycle’s side. If one looks at the bike casually, it will be almost impossible to tell that the two-wheeler was originally a Royal Enfield motorcycle. It is clear from the looks itself that the modification done is extensive. Certain additional elements that have been added will leave a bike enthusiast’s mind blown.

A photo of Americana that has been accessed by GaadiWaadi shows that the American flag has also been put on the teardrop-shaped fuel tank. In terms of looks, the bike is classy because of its matte black paint scheme and some subtle elements of blue, white and red. This scheme works well as it is common in both Captain America’s shield and USA’s flag. In terms of specs, the Americana has retained the front telescopic forks of the Royal Enfield, while the rear-end has gotten a horizontal monoshock with a custom swingarm. One of the main things that attract a person to the bike is its giant 190-section tyres. The wheels add to the sass and sportiness element of the single-seater motorcycle. On a closer look, you will also be able to spot a black exhaust that has gelled well with the entire theme of the classy two-wheeler.

Both the front and backlights of the motorcycle are LED units. The impressive attention to detail in modification has led to the bike having a more stylish handlebar in comparison to the original Royal Enfield motorcycle. The Americana has a flat handlebar which is paired with a single-pod instrument cluster with the Captain America logo. Since the modification is extremely extensive, it is difficult to say which model of the Royal Enfield motorcycle has been used here.