The pioneer of Laser Dentistry in India 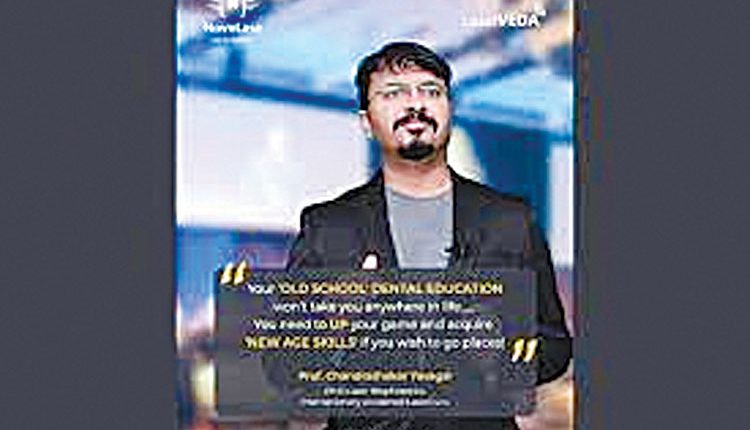 New Delhi, Oct 12 (Representative Dr. Prof. Chandrashekar Yavagal – India’s first Laserpreneur and an internationally acclaimed clinician, speaker, and Post Doctorate researcher on Laser Photomedicine, Paediatric Dentistry, and Paediatric Orthodontics. Road to SuccessThe Struggle is Real! Dr. Chandrashekar Yavagal grew up in the twin city of Hubli & Dharwad, where his father worked as a General Physician and Asthma/Allergy Specialist who treated patients for minimal/no fee. He decided to follow in his father’s footsteps in the medical field and thus pursued dentistry. Dr. Shekar had no bed of roses; he was a student par excellence; he had to suffer the bourgeois riddle of a financial crisis to receive adequate professional training. As a topper, he may have selected any division of medical education, but he preferred Dentistry especially Paediatric Dentistry as he is extremely fond of children and wanted to alleviate their discomfort, as well as demonstrate that the best healthcare techniques in the field can be brought to the local people by due vigilance and advancement. From tutoring junior students to selling his notes to pay his college fees, from working in shoddy make-shift clinics to making impressions for artificial dentures in dirty washrooms of bedridden patients, he has done it all! Since he chose to specialize in healthcare, he had to borrow books & tools from seniors in the course of completing his formal education. Despite the hardship, he was determined to succeed and was a through and through topper at BDS and Gold Medallist MDS – Paediatric Dentistry and further completed his Diploma in Orthodontics from Orthodontic World Institute (OWI), Barcelona, Spain.

He is a Fellow of the International College of Dentists, an Associate Fellow of the World Clinical Laser Institute, a Diplomate of the International College of Neuromuscular Orthodontics & Gnathology, Italy, and holds double doctorates from International Universities of repute. Back in 2006, he shot into the limelight when he treated a ‘Newborn baby’ with a laser device rented for Rs. 350 from a practitioner in his town. Since laser products were more expensive than in the global market, he realized that technology should be made affordable to all Indian doctors; only then can it reach our needy patients. He worked relentlessly to bust the myth that laser technology was only for the elite class in the Indian healthcare community, as he is always inspired by Ratan Tata, who fulfilled every household’s dream of owning a car with a small investment. He nixed job offers from several countries as he wanted to serve the people of our country. Award-winning, futuristic venture NovoLASE! This was the start of his amazing work in the field of lasers and resulted in the establishment of his novel co-venture NovoLASE, which manufactures ultra-modern laser devices and accessories that are compact, ergonomic, and in accordance with the highest international safety standards. Sixteen years after his first use of a rented laser, his designs and innovations at NovoLASE are minimalist yet contemporary and start with a modest investment of Rs.99,000/-. Yet there is no compromise on Quality – like most medical devices, NovoLASE is accredited with a statutory body, and all their products undergo a stringent quality control system-based protocol. It has been awarded ISO 9001 (Quality Control System) and ISO 13485/2016(specific for medical equipment) along with CE certification confirming to European Medical Standards.

Apart from this, NovoLASE also meets the World Health Organisation Good Manufacturing Process guidelines related to quality and manufacturing process and overall safety of the final product. 200+ Laser units are already installed across India, Malaysia, Singapore, Kuwait, and the recent installations have happened in the African city of Addis Ababa and the Kingdoms of Bahrain and Saudi Arabia. The Brain behind Novolase, as well as their designs, are Indian, but the execution occurs in a German console with an Italian Diode to confirm European norms. As a result, this is India’s first truly International Laser which hopes to mitigate the pain and suffering of millions of patients by making itself more affordable. Thus, NovoLASE is now poised to usher in a new era of healthcare in India by serving as a catalyst in the seismic shift from a pharmaceutical-dominated age to a ‘Photo’ceutical era of modern healthcare! Dr. Chandrashekar Yavagal’s Healing Solution LaserVEDA! As an empathetic person, he understands his patients’ anguish and strives to find creative and cost-effective solutions to their glooms. Dr. Shekar’s personality aided in the establishment of LaserVEDA, a super speciality chain of clinics and training centres. They encourage and implement laser therapy to facilitate painless healing in multiple healthcare sectors, including Oncology, Neurology, and Physiotherapy, by providing top-notch medical and dental services. Dr. Chandrashekar Yavagal’s Social Responsibility YHF!

He believes in giving back to society, and through the Yavagal Healthcare Foundation, he recently implemented a one-of-its-kind initiative – ‘Pink Smiles’ by performing preventive check-ups for thousands of Indian patients who consume PAN/ GUTKA/SMOKING to help detect and Prevent Oral cancer with a simple non-invasive 5 minute – Blue Diode Fluorescence Scan. This new technology, in conjunction with DNA ploidy, can detect a cancerous malformation two years before it becomes visible on the Oral tissues! Dr. Chandrashekar Yavagal A Speaker! In October 2018, he was the only Indian Dentist invited to France as a Speaker and Chairperson by WALT (World Association for Laser Therapy). He is the Lead Mentor for the Asian Academy of Laser Therapy and Vice-President for the College for Light Medicine & Laser Therapy, Germany, with more than 100 original research publications in National and International peer-reviewed journals and has conducted 300+ lectures and workshops in India, Singapore, Kuwait, France, and Spain and has performed 1000+ Laser Surgeries. He has also been featured in Fortune India and Forbes India Magazine. Disclaimer: This is syndicated feed from PR agency and any legal liability for the content is theirs only.