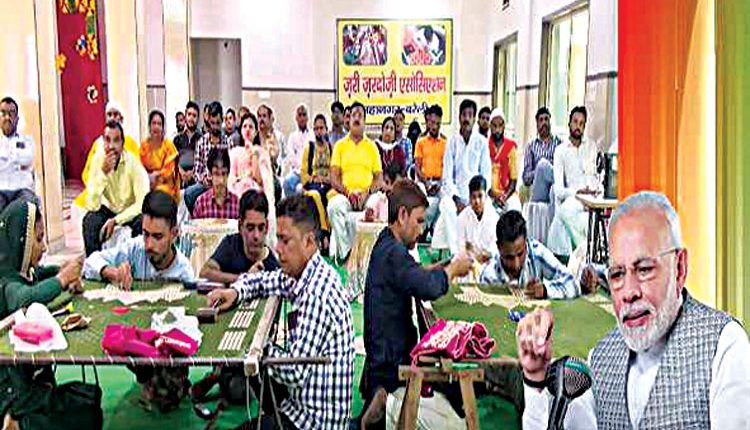 New Delhi, Sep 26 (FN Agency) Prime Minister Narendra Modi on Sunday called upon the people to buy Khadi on Gandhi Jayanti, as he also stressed on the mission for cleanliness, and making rivers pollution free in the 81st edition of his radio program Mann Ki Baat on Sunday. The Prime Minister also urged people to follow all COVID related precautions during the upcoming festival season. In his half-an hour long address, the Prime Minister also pushed for boosting research and production in the field of herbal and traditional medicines. The Prime Minister said production of khadi and handloom has increased multiple times and the demand has increased as well. “I would like to remind you again that on October 2, on the occasion of Bapu’s (Mahatma Gandhi) birth anniversary, let us together aim for another new record.

In your city wherever khadi is sold, handloom is sold, handicraft is sold and now that the festival of Diwali is there.., for the festive season, every khadi, handloom, cottage industry purchase of yours should strengthen the campaign for ‘Vocal for Local’, it should break all old records,” PM Modi said. He also stressed on the importance of cleanliness and said Mahatma Gandhi had connected cleanliness to the dream of Independence. The Prime Minister stressed on making rivers pollution free, and talked about the Namai Gange program. “Our scriptures distinctly disapprove of polluting rivers, even a bit! And our traditions have been synchronous with the thought,” he said. He also said that an e-auction of items gifted to him is going on, and the funds collected from the auction would go to the Namame Gange program. “These days, a special E-auction is being held. This electronic auction pertains to gifts presented to me by people from time to time. The money that accrues through this E-auction is dedicated solely to the Namami Gange Campaign,” he said. “The affectionate, warm spirit, with which you present me gifts …that very sentiment gets bolstered through this campaign,” he added. The Prime Minister also remembered Deen Dayal Upadhyaya and talked about his vision of ‘Ántyodaya’, and remembered former PM Lal Bahadur Shastri, whose birth anniversary also falls on October 2.