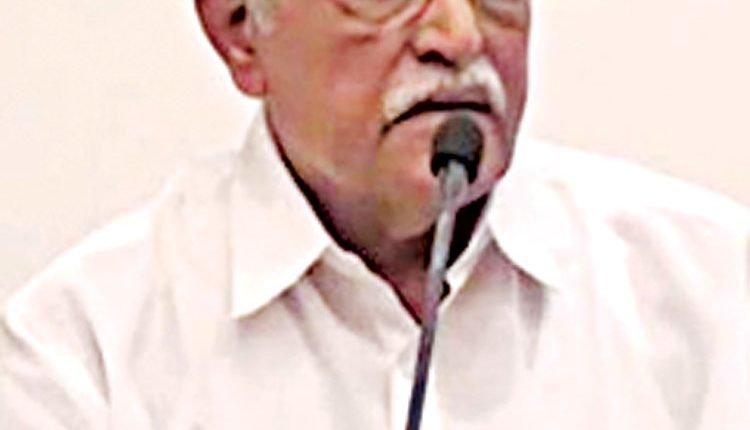 New Delhi, Aug 2 (Mayank Nigam) All India Bank Employees’ Association (AIBEA) General Secretary Ch Venkatachalam said there is a need to build a strong National movement to resist the attempts of privatisation of Public Sector Banks (PSBs) by the BJP-led NDA government at the Centre, taking it as a patriotic task of bank employees. Delivering his lecture in connection with the month-long AIBEA National Webinars to commemorate the 52nd anniversary of Bank Nationalisation on theme ‘Vibrant Banking for Vibrant India’ and focus ‘people’s money for people’s Welfare’, he deplored the attempt of the Government to privatise the Banks even at the hour of pandemic situation in the country when bank employees are facing extreme difficulties in attending to their duties risking their lives.

Mr Venkatachalam in a release tonight stated that AIBEA’s priority now is the safety of the bank employees as more than 1500 employees and officers have lost their lives due to infection of Covid-19 virus. But unfortunately, Government’s priority seems to be different as they are seriously pursuing their plans of privatisation. The AIBEA General Secretary referred to the introduction of the Bill in the Lok Sabha regarding privatisation of General Insurance Companies and said that our country has been developing and progressing in the last seven decades after independence of our country but the growth and economic development is not that adequate. Hence there is nothing wrong if some economic reform measures are taken to boost the economy and its development. But the question is whether these economic policies being pursued by the Government in the name of reforms have benefited our country or not. We can welcome these reform policies if they are good for our country’s growth and development, he added. But our experience has been that for the past three decades of such economic reforms agenda in our country, one could only experience that the benefit of such policies are not benefitting the majority of the masses and in fact, their condition has become worse than before. These policies have not been helpful to develop our economy at all.

The economy has been facing crisis after crisis. Adding fuel to fire, measures like demonetisation, faulty GST, etc. have also aggravated the economic problems. After this, the Covid induced lockdown in the country has further added to the problems. We see a lot of measures being announced by the Government in the name of relief and these measures have not yielded any positive results. On the other hand, the economic situation has further worsened. Millions of people have lost their jobs, production level has come down, prices are soaring and there is no light at the end of the tunnel. Many experts and economists have been suggesting that it is wrong measure to try to boost the supply end, and rather Government should concentrate on the demand side to boost consumption, which in turn will boost demand, production and lift up the economy to some extent, Mr Venkatachalam said. He said actually, there is a need to help the Banks to grow further by strengthening them. But regretfully, the NDA Government is choosing to privatise the Public Sector Banks instead of strengthening them. The top Union leader said, AIBEA believes that, we, as bank employees have to fight against privatisation of our banking sector and at the same time, we should also take part in the common struggles of the entire trade union movement against the anti-people, anti-worker policies of the Government. We can’t say that we would fight against privatisation of banks and that we will not bother about other measures of the Government. We must remain integrated. This should be kept in mind by all of us, he said.

Stating that as a major unit of UFBU, we have special responsibility to see that UFBU also remains united to fight the issue of privatisation of Banks. Privatisation of Banks is against people-oriented economy, against social banking, against rural economy, against the poor, the youth, and the unemployed, against farmers, as well as against employees, their jobs and job security, also against the reservation policy, he said and added that it is glaringly against the interest of the young employees who have joined the Banks in a large number in the recent years. When we say that we should fight on this issue as a priority task, we also know that there are many questions coming up from employees here and there. Some employees feel that straightaway we should give the call for indefinite strike, then only government will change their stand. Some people feel that we cant fight this issue, because privatisation is a global phenomenon and so it is bound to happen. Some feel that we cannot succeed because the Government in power now has majority in the Parliament. Some others feel that we should negotiate with the Government and get some financial benefit and then allow privatisation.

In a democratic trade union set up like AIBEA, all such views and opinions are bound to be there. We need to answer these questions and take the struggle forward, Mr Venkatachalam said. On the issue of indefinite strike, Is AIBEA afraid of giving the call. People should know that in 1954, AIBEA gave the call for indefinite strike against Nehru Government. Again, AIBEA gave the call for indefinite strike in 1979 against Morarji Desai Government. Later, UFBU also gave the call for indefinite strike on the issue of one more option to join pension scheme. So AIBEA knows when to give the call for indefinite strike. With 75 years of experience and history behind AIBEA, our members need to have faith that AIBEA will give such a call when it is warranted. It is true that throughout the world, many governments want privatisation of public sector. In many countries they have implemented also and public sector has been privatised. But, after bitter experience, it has been re-nationalised also. In many countries, trade unions have fought and stopped privatisation of core sector. Wherever people have fought, there have been some results. He said Bank privatisation is anti-people. Bank Nationalisation is pro-people. Hence defending public sector banking and opposing privatisation is a patriotic struggle. As a part of this series of lectures, AIBEA invited many eminent personalities from the political field, trade unions, academicians, legal profession, Members of Parliament who addressed on various important topics.