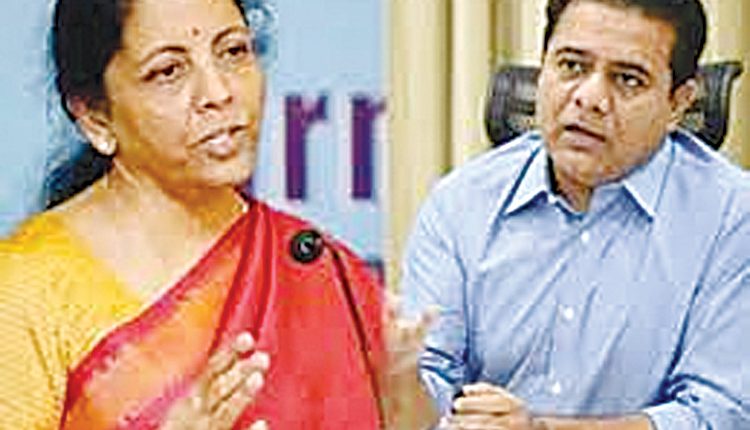 New Delhi, Aug 4 (FN Representative) Telangana IT Minister K T Rama Rao (known as KTR) on Thursday said that Union Finance Minister Nirmala Sitharaman’s statements on the state of Indian Economy in a debate in the parliament, are very ‘disappointing to listen and a crude joke’ on millions of Indians, who are suffering daily due to the mismanagement of the economy by the NPA (Non-Performing Alliance) government. Sitharaman’s words about inflation and its impact on the common man are completely devoid of truth, he alleged and said the very fact she is claiming that the GST collection has increased indicates the indifference of Modi’s regime towards people’s suffering, KTR said in a statement here. The FM should know that no amount of spin and sophistry can cover up facts.

Act of God and acts of fraud notwithstanding, the fact is that failed economic policies (such as Demonetisation) of the NPA Government have resulted in disastrous consequences for India, the Minister said. The lopsided economic policies of the NPA Government have resulted in unprecedented economic crises since Independence. The country is witnessing massive job losses and a systematic erosion of incomes, said KTR. Some undeniable facts including Indian rupee is slumping to an all-time low against the US dollar ; Highest Inflation rate in 30 years ; Highest unemployment rate in 45 years is again a result of alround policy paralysis and India surpasses Nigeria in poverty numbers, he stated. The continuous rise in the price of almost all essential commodities is hurting the common man. These are all telltale signs of the deep mess that the BJP led Central government has forced our economy into, he said.. From democracy and press freedom to income inequality and corruption, irrespective of the topic index, India is performing miserably on global developmental indices of all kinds.

Thanks to hare-brained decisions such as demonetisation and a hastily implemented GST, the Indian economy has been in doldrums during the 8 year tenure of PM Narendra Modi. This Government’s mismanagement of the Indian economy is precisely the reason behind several eminent economists leaving the top posts in RBI and other reputed organizations of GoI. Demonetisation was hailed by PM Modi as a magic bullet to cure several ills that ail our economy. But six years after that decision, the results show it was an utter failure that bled our economy. Hundreds of people lost their lives waiting to exchange currency at the banks, millions lost their livelihood and RBI spent a whopping Rs 8000 Crores only to print new currency. While the Modi Government bluffed that 3-4 lakh Crore of black money would be wiped out, almost 100% of the demonetised currency came back to RBI. The cash in circulation rose from 18 Lakh Crore in Nov 2016 to 31 Lakh Crore in March 2022 – an increase of a whopping 68% when compared to pre-demonetisation era. All these are clear indicators that demonetisation was a colossal failure. GST, another hastily implemented economic reform, also failed spectacularly. Citizens are put to hardships owing to meaningless tax structures on essential goods, States are being robbed of their legitimate tax revenues, and industry is penalized and terrorized by the Union Government agencies, he said.

The ruthlessness of this regime is proved by levying GST on essential commodities used by every citizen such as milk, curd, and rice. Narendra Modi has the dubious distinction of being the first PM to have levied GST even on handloom. The BJP led Union government has not spared even the goods essential for kids such as pencils and erasers, he said. Children writing letters to the PM about the high cost of stationery shows the heartlessness of the regime. From hospital beds to health insurance to funeral services, Modi’s regime has not spared anything and anyone from GST, he stated. Another classic example of how the BJP led Union Government is resorting to extortion of the common man is the increase in Central taxes and cess on Petroleum products, KTR said that in 2014 , the central taxes on Petrol and Diesel were at Rs 9.48 and Rs 3.56 respectively. By 2022, the central taxes and cess on Petrol and Diesel increased to a whopping Rs 19.90 (doubled) and Rs 15.80 (increased 4.5 times) respectively. In 2014, the total contribution to central and state exchequer by way of taxes on petroleum products was almost the same. But by 2022 the collection by the Union Government has increased nearly 2.5 times.

Such high taxes have had a devastating impact on the industry and also on the citizens of this country. High fuel taxes directly contributed to the rising inflation, the IT Minister said. Just to cover up economic mismanagement, BJP and its propaganda machinery may blame Covid19 and Russia-Ukraine war. However, the fact that there was eight consecutive quarters of economic slowdown even before Covid and the subsequent lockdown clearly proves that the faulty economic policies of the Modi government are the foremost factor that has worsened the economic situation in India, said KTR. The NPA government may get away in GST council and Parliament using brute force but the people of the country will never forget the pain caused by their erroneous economic policies. Lack of foresight, inability to predict adversities, ill-conceived policy interventions, crony capitalism favoring a few big corporate houses seem to be the hallmark of this NPA Government, he said. To divert the attention from the pressing day-to-day issues, the Modi regime is resorting to divide and rule tactics and is unleashing central government agencies on people and parties that question their policies, he alleged. Instead of excuses and self adulation, Modi’s government should focus on taming the inflation and initiate measures to alleviate the pain of the common man, he added.