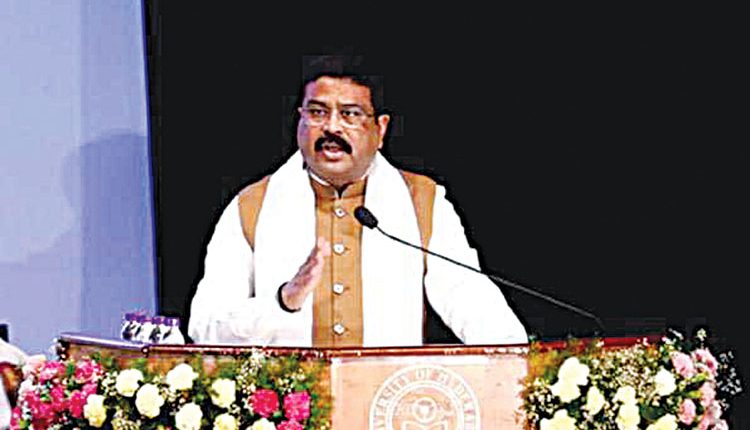 New Delhi, Oct 1 (Bureau) Union Education and and Skill Development Minister Dharmendra Pradhan has said that the innovation and entrepreneurship will help India become an economic superpower and a knowledge-based economy. In his chief guest address at the XXII Convocation of the University of Hyderabad (UoH) held at the Global Peace Auditorium, Brahma Kumaris Shanti Sarovar, Gachibowli, here on Saturday, Pradhan said “Convocation is a major milestone that changes the track from learning to practice”. He congratulated the University for emerging as the center of excellence and being the torch-bearer in making India a knowledge-based economy.

“I am confident that when India will be celebrating 100 years of independence, UoH will be one of the major epicenters of our knowledge-based society. I also expect our students to give back to society to make their education more meaningful and purposeful”, he added. Pradhan said that innovation and entrepreneurship will help India become an economic superpower and a knowledge-based economy. Further, he encouraged students to do their bit for the betterment of the society and to make education more meaningful. Drawing an analogy, he further remarked, “Hyderabad is known as the city of decorative pearls, and the University of Hyderabad is the intellectual pearl.” Telangana Governor and Chief Rector of UoH Dr Tamilisai Soundararajan said “There are only three mantras you need to succeed in life – Hard work, Hard work, and Hard work. She encouraged the students to make research a part of their lives and focus on their inner strengths as espoused by Swami Vivekananda. The auditorium was filled with radiant faces and joyous screams of the students as they embarked on a new journey with new life, hopes, and dreams in their eyes. The UoH gave away the coveted degrees to 4800 students enrolled in various programs and graduated in 2020, 2021 and 2022, with 1631 receiving their degrees in person and remaining in absentia.

573 out of 4800 are Ph.D. Scholars and multiple students were felicitated with awards and medals (484) for their extraordinary performances. The ceremony was conducted after a period of three years due to the pandemic. Earlier, Justice L Narasimha Reddy, esteemed Chancellor of the University, declared the ceremony open and administered the oath to the recipients. In his Annual Report Prof B J Rao, Vice-Chancellor applauded the faculty, students, and parents for their contribution in making the University of Hyderabad an Institution of Eminence. “The University has uploaded a total of 36270 records of the degrees awarded from 1977 to 2022 to the digilocker system, which by itself is a record”, he added. While addressing the students, he said, “You have been fortunate enough to receive a higher education, and now it is your chance to extend your hand to the deprived sections of the society.” Justice L Narasimha Reddy congratulated the entire fraternity of the University of Hyderabad for reaching great heights with every successive year. “This is the time for us to show to the world the power of our education system. It is all about the survival of the fittest with the entry of private universities and the resultant prevalence of stiff competition. You have to reciprocate what the nation has given to you. This is the value system which can genuinely help you to succeed in life”, said Justice Reddy.