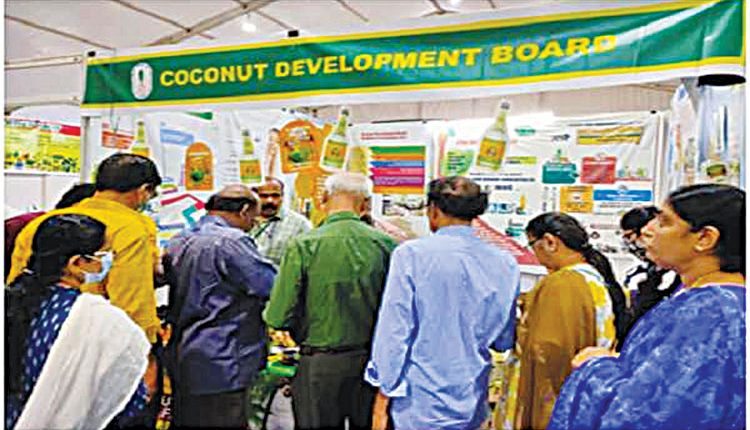 New Delhi, Oct 17 (FN Bureau) Making remarkable achievement, India’s export of coconut products excluding coir products during the year 2021-22 touched Rs 3,236.83 crore recording an increase of about 41 per cent over the previous year.The production of coconut in India during 2021-22 was 19,247 million nuts which accounts for more than 31 per cent of the global production, a release said on Sunday.Total export including coir reached at Rs. 7577 crores which shows the importance of coconut to Indian economy.The productivity was recorded at 9,123 nuts per hectare. Our total area under coconut is 2.10 million ha.India leads the coconut growing countries in production and productivity and holds third position in area under coconut.In India coconut based industries are growing in number bringing new products in the markets and also giving employment opportunities to many.

The Coconut Development Board (CDB) has extended support for the establishment of 537 new coconut processing units with a capacity to process 3,638 million nuts per year.Activated carbon, coconut oil, dry coconut, desiccated coconut, fresh coconut and virgin coconut oil are the major coconut products exported from India.The State of Tamil Nadu occupies a major share of the coconut cultivation in India. In productivity Tamil Nadu occupies the third position in the country. Coconut is currently cultivated in an area of 4.44 lakh ha in the state.Production of coconut in the state is 512.82 million nuts with a productivity of 11526 nuts per ha.The state contributes to about 20 per cent of area and 26 per cent of production under coconut in India and stands first in coconut processing unit establishment.Coimbatore ranks the top position in area under coconut with 88,467 ha.The farmers of the state has also ventured into processing and value addition of coconut and its products.

Almost 70 per cent of the country’s coconut processing units right from milling copra, activated carbon units, virgin coconut oil units, packaged tender coconut water units, spray dried coconut milk powder units, coconut milk units and many other innovative value added coconut product units are from the state of Tamil Nadu.Tuticorin and Chennai ports deal with a major chunk of the export of coconut products. Export through the ports of Tamil Nadu tops in the exports of coconut based products in the country with a share of 60 per cent.The state is the leading exporter of coconut shell based Activated Carbon Coconuts, Coconut Oil and Coconut Shell Charcoal and ranks second in position in export of Desiccated Coconut.Pollachi region in Coimbatore is emerging as a major hub for the export of coconut and coir products from India and also caters to the requirement of tender coconut in the country.During the past 8 years, from 2014-15 to 2021-22, the Board has expended Rs 290.82 crore for various field oriented schemes, establishment of coconut processing units and insurance schemes.During the year 2022-23, an amount of Rs 14.17 crore is earmarked for various field level coconut development programmes.