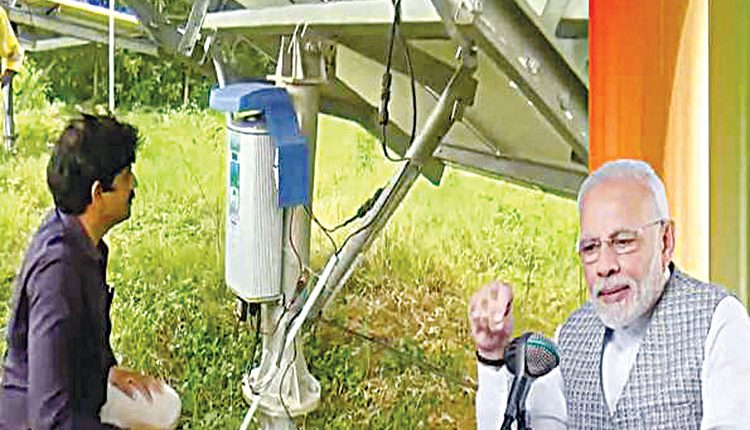 New Delhi Oct 30 (FN Bureau) Prime Minister Narendra Modi on Sunday said India has become one of the biggest countries to generate electricity from solar energy and the whole world is looking at solar energy as the future. “Today, India is combining its traditional experiences with modern science, that is why, we have become one of the largest countries to generate electricity from solar energy,” Prime Minister said, while addressing the 94th edition of Mann Ki Baat programme on All India Radio. He stressed that, “India is combining her traditional experiences with modern science in this field and further stated that solar energy is changing the lives of the poor and middle class of the country is also a subject of study”. Modi said the Sun has not only been worshipped for centuries in India, but has also been the focus of the way of life of the people.

He cited the example of Thiru K. Ezilon of Tamil Nadu, who is a farmer. Mr Ezilon took the benefit of “Kusum Yojana” and installed a solar pump set of ten horsepower in his farm. “Now, they do not have to spend money on electricity for their farm. They are not even dependent on the government’s electricity supply for irrigation in the field anymore” he stated. PM Modi said solar energy has demonstrated that people can be paid for producing electricity instead of paying for using electricity. Speaking about the country’s first Solar Village – Modhera of Gujarat, Prime Minister said most houses in Modhera “Surya Gram” have started generating electricity from solar power. The Prime Minister said people of many villages of the country are now writing to him stating that their village should also be converted into Surya Gram. “The day is not far when the construction of Surya Grams in India will become a big mass movement” he added. The Prime Minister said Modhera should be an inspiration for the whole country and this experience can be replicated across the country.

Talking about the space sector, Modi said, ” India is doing wonders in the space sector as well and the whole world is surprised at its achievements of India, adding that India placed 36 satellites in space simultaneously, just a day before Diwali. The Prime Minister said, “Due to the launch the digital connectivity will be further strengthened and even the remotest areas will be more easily connected with the rest of the country. He added that India has emerged as a strong player in the global commercial market with the launch and new doors of opportunities have also opened up for India. “The scientists of India not only developed indigenous technology but dozens of satellites are being sent to space simultaneously with the help of this technology today” he pointed out.

The Prime Minister said the collaboration of IN-SPACe is going to make a big difference in this area. Non-government companies are also getting the facility to launch their payloads and satellites through IN-SPACe. He urged Startups and Innovators to take advantage of these huge opportunities being created in India in the space sector. PM Modi said he had called for “Jai Anusandhan” from the Red Fort and had also talked about making this decade the Techade of India. He expressed delight that on the October 14 and 15, all 23 IITs came on one platform for the first time to showcase their innovations and research projects. The Prime Minister gave the example of a team from IIT Bhubaneswar who developed a portable ventilator for newborn babies. It runs on battery and can be used easily in remote areas. He said this can prove to be very helpful in saving the lives of babies who are born prematurely. Touching upon the subject of the environment, Modi highlighted that there is no dearth of people who spend a lifetime in the protection of the environment.

“We have recently launched Mission LiFE, an initiative to promote sustainable living and making lifestyle choices that are good for the environment” he said. He said, “Mission LiFE is based on a simple principle which encourages a life of sustainable development without harming nature. He also urged the countrymen to accept and strengthen this initiative. Modi cited the example of Suresh Kumar, who lives in Bengaluru. Twenty years ago, Kumar had taken the initiative to rejuvenate a forest of Sahakarnagar in the city. The saplings that were planted 20 years ago have grown into 40 feet tall trees. The Prime Minister hailed some villages of Tripura which have set very good examples. These villages have ascended to the level of Bio-Village 2. Bio-Village 2 emphasizes how to minimize the damage caused by natural disasters. Under this, full attention is given to improving the quality of life of the people through various measures, he said. The Prime Minister said, there is a complete focus on Solar Energy, Biogas, Bee Keeping and Bio-Fertilizers and stressed that Bio-Village 2 is going to lend a lot of strength to the campaign against climate change. On the Chhath festival, PM Modi said, the tradition of worshiping the Sun is proof of how deeply Indian culture and faith are related to nature. He said the festival of Chhath also emphasizes the importance of cleanliness. “On the arrival of this festival, roads, rivers, ghats, and various sources of water, are cleaned at the community level.

Modi said the festival is also an example of Ek Bharat- Shrestha Bharat” he said. The Prime Minister said National Unity Day will be observed on October 31, on the occasion of the birth anniversary of Sardar Vallabhbhai Patel. “On this day, Run for Unity is organized in every corner of the country and this race strengthens the thread of unity in the country and inspires the youth” he added. On the recently concluded National Game in Gujarat he said,the National Games have given a strong message of unity while promoting India’s sports culture at the same time. The Prime Minister expressed happiness that the National Games this time was the biggest ever event organized in India and congratulated all the players who won medals, made new records, and participated in this sports competition.