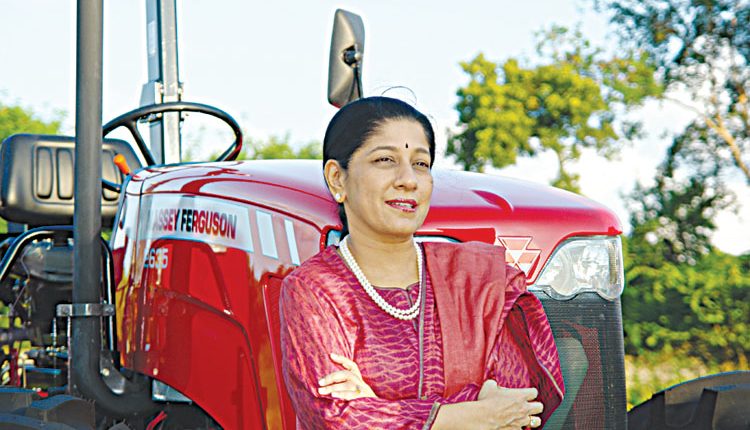 New Delhi, Jan 24 (FN Bureau) Tractor and Farm Equipments (TAFE) Chairman and Managing Director Mallika Srinivasan said developments in global trade have dominated headlines over the last few years and became an increasingly key imperative for governments and businesses all over the world to focus on. Mallika, who was the moderator at a plenary session on Building Resilient Global Value Chains: Advancing Inclusion & Integration of All” in the B20 event at Gandhinagar in Gujarat yesterday, said, given that Global Value Chains have played a key role in stimulating economic growth, boosting investments, creating jobs and building further the respective strength of each participating economy. Despite the widely reported rise in protectionism and bilateral trade tensions, global trade of goods and services reached a record level of over 30 trillion dollars in 2022, signalling resilient global demand, according to a press release here today.

Trade in services has proven to be particularly resilient and posted an increase of 15% year-on-year in 2022 as compared to 10% increase in global goods trade in the same period. Investments have rebounded too, post the pandemic. Governments around the world have been proactive in reshaping supply chains by offering attractive investment schemes for investors. “With this backdrop, while FDI flows dropped 17% post pandemic, they recovered to pre-pandemic levels of 1.6 trillion dollars. However, despite the broader positive outlook, there are some global trends that require us to build resiliency into our global value chains as a priority. Bilateral trade tensions among major trading blocks having intensified leading to an imposition of rising tariffs and sanctions”, she said. Mallika said the outbreak of the recent military conflict led to a variety of restrictive measures which significantly impacted global supply chains. We are now at a point, where formal trade restrictions are estimated to impact 1.4 trillion dollars of trade among G20 countries.

Restrictive trade in investment policies have also impacted FDI activity and these factors give rise to expectations that there is a significant shift in trade mix likely. Global undercurrents have also had second order effects leading to disrupted production, higher prices for consumers, limited consumer choices, misallocation of resources and loss of jobs. Hence, there is indeed a pressing need for us to address the resilience across the ecosystem. In the midst of all this, it’s nice to note that Asia has emerged as a leading light globally. While FDI inflows into developed economies have dropped, there were record inflows into emerging economies in Asia, Mallika said. Asia share of global FDI inflows has seen a consistent increase capturing 40% of global FDI inflows in 2022, underscoring the resilience of Asian nations. 2022 saw India become one of the fastest growing countries in the world and complete a successful emergence out of a pandemic induced slow down. In 2022, India’s real GDP grew at 6.9% proving that a large country with a democratic pluralistic system can achieve significant economic growth and development for its people. In parallel to its surging economy, many eyes are on India’s population growth as well. One estimate put India’s population at estimated 1.47 billion at the end of 2022, as already 5 million in excess of China’s and in any case, certainly expected to be the most populous in 2023, she said.

Mallika said India’s ambitious foray into the global economy with its human capital and entrepreneurship has underlined its leadership among the emerging and developing economies. The global focus on the India growth story is indicative of its growing importance in accelerating international development and cooperation and strengthening multilateralism. India has historically been an active leader and participant in the G20 processes on the Sherpa and finance track, its support for global cooperation inclusive development, economics stability, and sustainable growth is in line with its national goals as well as the values espoused by other leaders of the G20. “As one of the most diverse nations in the world, India appreciates that inclusivity is the key to growth and will play a strong role in driving resilience, sustainability, digitization, and enhancing the services trade, to name a few of the issues”, she added.