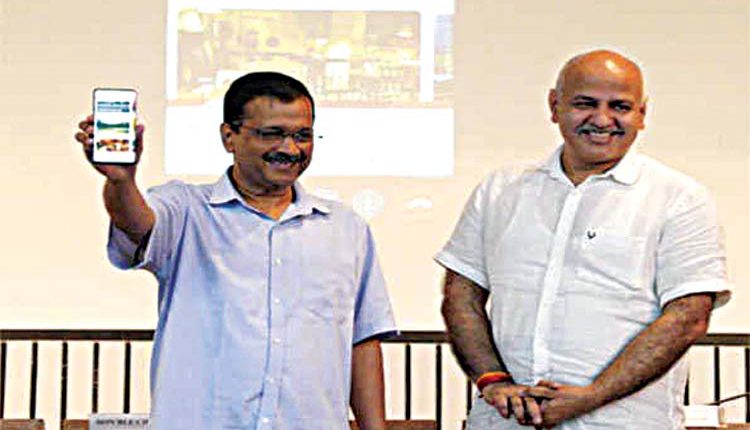 New Delhi, Sep 27 (FN Representative) On the occasion of World Tourism Day, Delhi government launched the official mobile app for tourism on Monday which will allow the users to access information about tourism sites and locations of tourists attraction within five kilometres of radius of their cellphones’ location. The app, called Dekho Meri Dilli Mobile, was launched by Chief Minister Arvind Kejriwal in Delhi Secretariat today. Deputy CM Manish Sisodia, Cabinet Ministers Satyendar Jain and Rajendra Pal Gautam, and Vidhan Sabha Speaker Ram Niwas Goel were present at the launch event. “Delhi boasts of amazing food, the most indulging entertainment and the most revered monuments. But, we lacked information about them, this app will plug that information gap. All information about tourism in Delhi will be available on this app in an organised, user-friendly, and effective manner,” Kejriwal said.

Speaking upon the utility of the app, the minister informed that Dekho Meri Dilli has a unique feature that enables its users to browse through monuments, eating joints, entertainment and recreation sites within a 5 kilometre radius of their location. Claiming the app to be first-of-its-kind in the country, the CM said that it will help people make better use of their time and know the city better. “This will definitely be useful for tourists, but I am certain that the people of Delhi will make more use of this app. It’ll help us make better use of our time and know our city better. The app has been designed with such sensitivity for the people that even information about public conveniences is available on the app. This is a first of its kind app in India.

Some cities in developed countries have such apps on offer. Delhi joins that small list of cities today,” he added. Meanwhile, Kejriwal hoped that the mobile app will give an “enormous” push to the national capital’s tourism economy. “I want to appeal to everyone in Delhi and the country to download this app and make use of it. We also expect all foreigners coming to Delhi to be using the app. Our target is to make tourism in Delhi an experience that will make people want to stay in Delhi longer and spend more on the businesses of Delhi,” he said.