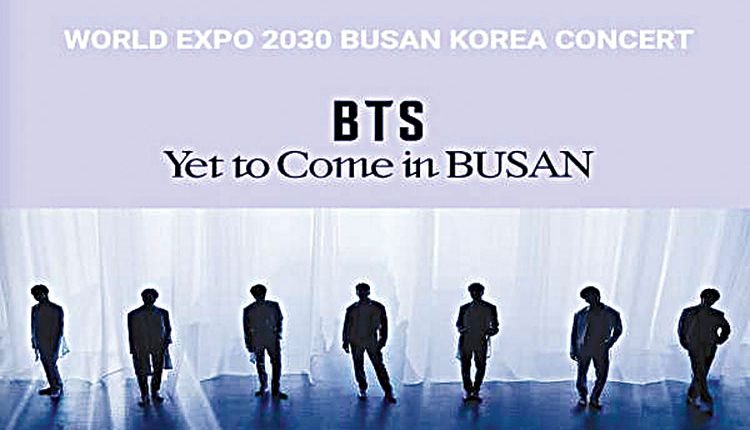 Busan, Oct 15 (Representative) Busan’s all “bora” and it has been purpled since ARMYs started flocking to the coastal city of South Korea for Saturday’s mega free concert that BTS is holding for all fans across the world with people set to join live online. The K-pop superband is holding its concert “BTS ‘Yet To Come’ in Busan” in its efforts to support and promote Busan’s bid to host the 2030 World Expo. The city has literally lit up in purple as landmark spots, from Busan City Hall to the Gwangan Bridge and Busan Tower, gleam in purple every night. On Friday night in the warm up to the concert, ARMYs almost had a semi event with loud fanchants outside the stadium, where the septet was practising. Busan is also home town of two from maknae lines — Park Jimin and Jeon Jungkook. ARMYs have flocked to Jimin’s dad’s cafe Magnet — with some landing straight after their flights. Jimin’s dad was seen in many video posted by the fans — distributing Jimin merchandise (on October 13 the vocal lead’s birthday), even on Saturday morning he distributed yakult to ARMYs waiting outside his cafe. Lighting event, titled “Borahae Busan” was launched by the city government on October 10 and will continue till October 17. The highlight of the event will come with the drone show, which is set to take place at 9 pm (local time) on Saturday at the Gwangan Beach. “Borahae (I Purple You)” (coined by V) is a word used instead of “I Love You” by BTS and its global fandom, ARMY.

The global pop group will hold the free concert in the southeastern port city marking their coming together momentously amid their individual projects announced a day their anniversary in June.The septet, which wrapped up the first chapter of its nine-year career with the anthology album “Proof” in June, will share traces of its journey with its fans during the concert at Busan Asiad Main Stadium. The show will be the septet’s first performance in South Korea since March, when the group staged the Permission to Dance on Stage shows in Seoul. But it will also be the first BTS concert at a fully packed stadium, where most of the 50,000 seats will be taken by its fans, in three years, Yonhap news agency reported.On Saturday, BTS is expected to perform its hit singles, such as “Butter,” “Dynamite,” “Permission to Dance” and “On,” as well as tracks from “Proof,” including its main single, “Yet To Come”, besides “Cypher” and “Run BTS” two tracks that ARMYs would love to watch. Various symbols of Busan will also be featured during the show to boost interest in the city’s bid to host the 2030 World Expo, according to the band’s agency Big Hit Music. Organizers originally planned to hold the concert at a makeshift seaside stage in the city’s Gijang County but later changed the venue to the Busan Asiad Main Stadium, a location close to the city’s downtown areas, due to safety and accessibility concerns, Yonhap said. There also was a controversy surrounding the costs for hosting the free concert after it was reported Big Hit Music and its parent company Hybe will likely have to seek a way to solely fund about 7 billion won (US$4.8 million) needed to host the concert without any monetary support from the Busan city government or the 2030 World Expo hosting committee.

Fans claimed the local government was exploiting the group by aiming to make huge profits without spending any money on the show.But Hybe said in a statement in September that it and BTS have focused more on “valuable results than costs” in participating in nationally important events and reaffirmed its plan to fund the concert with sponsoring from private firms and online ads, as well as its own coffers if necessary.Fans who failed to obtain a ticket can enjoy the show live on large screens set up at Busan Port and Haeundae Beach, Yonhap reported. Hybe also prepared various entertainment events for fans coming to see the show under “The City” project. They include the “2022 BTS Exhibition: Proof,” an exhibition that looks back on the septet’s nine-year history; stores selling merchandise for the Busan concert; and BTS-themed accommodation packages offered by five major hotels in the city.Lotte World Adventure Busan, an amusement park in the city, has been lit up in purple and put on laser and fireworks shows with the band’s music until the end of this month. For fans in Korea and Japan, the BTS concert will also be available on TV broadcast channels like JTBC and Japanese TBS Channel 1. It will also be livestreamed on various online platforms that include Weverse, ZEPETO and Naver Now. On Weverse, a K-pop fan community platform, the concert will be available in eight languages — Korean, English, Chinese, Japanese, Spanish, Indonesian, Vietnamese and Thai.