‘We see Hydrogen as the future energy’ 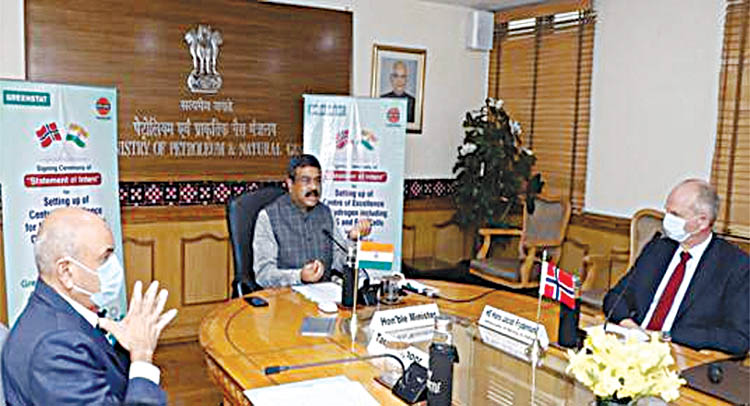 “Statement of Intent” signed between Indian Oil and Greenstat Hydrogen India Pvt. Ltd for setting up of Centre of Excellence for Hydrogen

New Delhi, Feb 18 (FN Bureau) Minister of Petroleum and Natural Gas & Steel Shri Dharmendra Pradhan today witnessed the signing of a Statement of Intent between IndianOil Corp. Ltd. and M/s Greenstat Hydrogen India Pvt. Ltd., a subsidiary of Greenstat Norway for setting up of Centre of Excellence on Hydrogen. This association aims to develop a Center of Excellence on Hydrogen (CoE-H) including CCUS and Fuel Cells by IndianOil and M/s Greenstat for clean energy in cooperation with Indo-Norwegian Hydrogen Cluster companies/organizations.

The CoE-H will facilitate transfer and sharing of technology, know-how and experience through the green Hydrogen value chain and other relevant technologies including hydrogen storage and fuel cells. The CoE-H will be a vehicle for promoting R&D projects in Green and Blue Hydrogen between Norwegian and Indian R&D institutions/universities. Working closely with Industry and Governments on both sides, CoE-H will be levering its intellectual strengths in developing cost-efficient and scalable and sustainable technological solutions. The CoE will also pilot fuel cell research. The institute will also act as a think-tank towards developing codes and standards for best industrial practices, safety, product protocols and regulations in the area of hydrogen and fuel cells. The partnership between IndianOil and Greenstat will actively assist partners/stakeholders to develop business models based upon feasibility studies besides facilitating consultancies to industry, utilities and regulators on hydrogen storage, hydrogen production, refueling stations, fuel cells and CCUS technologies. Speaking on the occasion, Shri Pradhan talked about the importance, Government of India is giving to exploration of new and emerging forms of energy. About India’s energy consumption, he said that India is the third-largest energy consumer with growing energy demand, making it the place to be, for any energy entrepreneur in any part of the globe. He called for greater synergy between science, technology and entrepreneurship to create win-win for all.

Speaking about hydrogen energy, Minister Pradhan said, “We see hydrogen as the future energy.” He also expressed happiness at the encouraging results being shown by the pilot project under which 50 buses in Delhi are running on hydrogen-CNG fuel. Speaking about Hon’ble Prime Minister Shri Narendra Modi’s vision of energy justice, he said that it encompasses energy affordability, energy efficiency and energy sustainability. “Despite India not being a polluting country, India is committed to reducing its emissions and contributing to the global fight against climate change, in line with Hon. Prime Minister’s commitment at the COP21”, he further added. Ambassador of Norway to India HE Mr Hans Jacob Frydenlund while speaking on the occasion, said that in the efforts to combat global climate change, use of green and renewable energy is paramount. He talked about Norway’s strength and experience in green energy and expressed willingness to work together with India in the area of hydrogen energy. He also expressed happiness at the signing of statement of intent.

Speaking at the 3rd Global Renewable Energy Investment Meeting and Expo in November 2020, Hon’ble Prime Minister Narendra Modi had highlighted the importance of niche renewable technologies like hydrogen in the renewable energy mix. Pursuant to that, launch of the National Hydrogen Energy Mission was announced in the budget 2021-22. The National Hydrogen Energy Mission aims to lay down the Government of India’s vision, intent and direction for hydrogen energy, strategies and approaches for realizing the vision. A pilot project for blending hydrogen with compressed natural gas for use as transportation fuel is running at Rajghat Bus depot in Delhi. Under this pilot, 50 buses in Delhi are plying on blended Hydrogen in Compressed Natural Gas and result are extremely encouraging.

SC seeks response of Election Commission on plea for e-voting