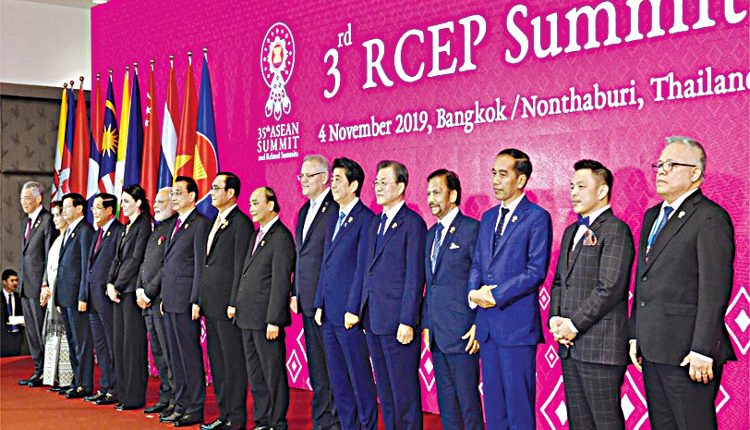 New Delhi, Apr 10 (Mayank Nigam) Singapore has ratified the Regional Comprehensive Economic Partnership agreement– the first participating country of the world’s largest free trade deal to do so. The Southeast Asian country deposited its instrument of ratification with the Secretary-General of ASEAN on Friday, the Ministry of Trade and Industry said. “Singapore’s expeditious ratification of the Regional Comprehensive Economic Partnership agreement signals Singapore’s strong commitment to strengthening our trade and economic linkages with our partners, for the benefit of our businesses and people. We look forward to our fellow RCEP Participating Countries doing likewise, to expedite the entry into force of the agreement,” a ministry statement quoted Trade and Industry Chan Chun Sing as saying.

Chan said Singapore hopes the other participating countries will ratify the deal and expedite its entering into force. The RCEP is the world’s largest trade bloc, accounting for some 30 per cent of global gross domestic product and nearly a third of the world population. India, one of the founding members, opted out of the deal due to concern that its trade deficit with China would grow. The pact will come into effect 60 days after it is ratified by six of the ASEAN members and three ASEAN FTA partners of the other countries. “As a key regional agreement, the RCEP will complement Singapore’s existing network of FTAs, expand our economic space, and boost trade and investment flows. It will further broaden and deepen Singapore’s economic linkages and connectivity with the region, open up opportunities and provide businesses with preferential access into growing markets,” the ministry said in a statement accessed here.

“Businesses can expect to benefit from tariff elimination of about 92 per cent on average, as well as streamlined rules of origin for greater flexibility to tap on preferential market access benefits,” the statement said. The RCEP was signed last November by 15 Asia-Pacific nations. RCEP groups the 10 ASEAN members — Brunei, Cambodia, Indonesia, Laos, Malaysia, Myanmar, the Philippines, Singapore, Thailand and Vietnam — plus Japan, China, South Korea, Australia and New Zealand.