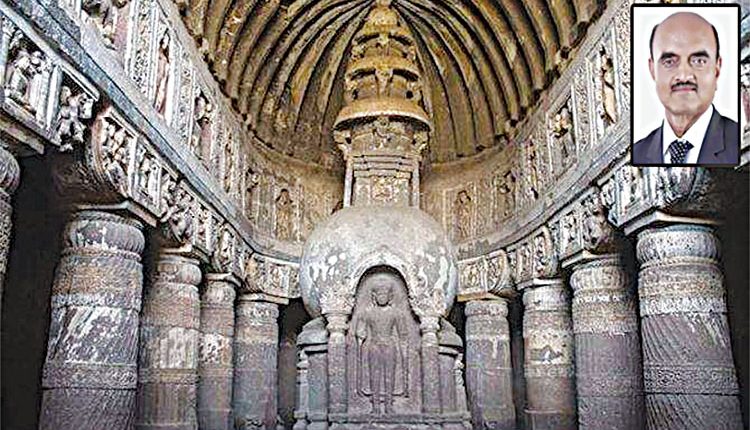 Aurangabad, Mar 23 (Bureau) BJP Rajya Sabha MP Dr Bhagwat Karad on Tuesday said in the Rajya Sabha that it was necessary to build infrastructure for the growth of tourism in the world-famous Ajanta and Ellora caves, which have a rich historical heritage of Buddhism and Jainism, mainly in the this district of Marathwada region. The economic development would come from tourism development, he asserted in the same regards. He said, “There is a need to provide infrastructure, including roads, restrooms, hotels, helipads, sound and light shows, so that night tourism can also develop in that place. Tourists can stay in the area at night and enjoy the tourism.”

“At the same time, efforts should be made at the government level to advertise these places. Accordingly, this can be made possible through various mediums and initiatives,” he spoke, adding cultural festivals should also be organized at Aurangabad and Ellora. He further said, “Aurangabad is the state’s tourism capital with an international-level airport. There is a separate terminal. However, the limited number of airlines in the city is a hindrance to tourists. A large number of tourists and scholars from abroad visit here in connection with Buddhist heritage, research and preservation.” In 1983, UNESCO declared four World Heritage Sites, including the Caves at Ajanta and Ellora.

Among the Jyotirlingas, Grishneshwar Temple and Shahaji Maharaj Gadi Caves are nearly at a distance of one km and Devagiri Fort is also close to the Ellora Caves. Dr Karad stated, “About 25 lakh tourists from home and abroad visit these caves every year, so it is necessary to develop tourism facilities in this area, so that different businesses will be added and our culture will be preserved.” He also asked to expand air connectivity to Aurangabad as “tourists from major countries like Japan, Malaysia and Thailand visit Ajanta and Ellora in large numbers”. Lastly, he said that “creation of a national-level independent body” should be considered for the preservation of the caves.

I will not give up even an inch of land as long as my breathing lasts: Mamata