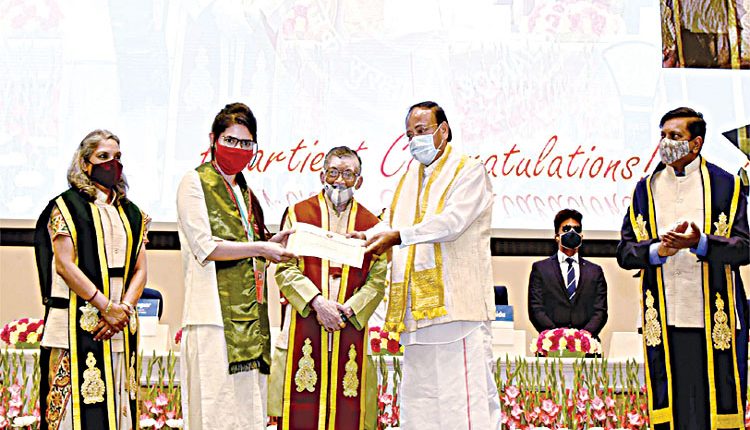 New Delhi, Mar 7 (FN Bureau) Vice-President M Venkaiah Naidu on Sunday said ‘resilience, research and reinvention’ helped India become a torch-bearer in the global fight against the Covid-19 pandemic. He also applauded the untiring efforts and ingenuity of Indian researchers and scientists for finding technological solutions to the challenges thrown by the pandemic. Addressing the first Graduation Day ceremony of ESIC Medical College (Faridabad) held here at Vigyan Bhavan, the Vice-President credited the timely and decisive measures by the country’s doctors, scientists, and policymakers for containing the spread of the virus.

‘I salute the entire medical fraternity from doctors to nurses, para-medical staff and sanitary workers, technicians and ASHA workers in villages, who, as Team India came together as one to fight the pandemic,’ he said. Mr Naidu also lauded the Indian industry for ramping up the production of essential items such as PPE kits, surgical gloves, face masks, ventilators, and vaccines. The Vice-President also appreciated the medical and Para Medical Institutes being run by ESIC for their role in the fight against the Covid-19 pandemic. Terming the graduation ceremony as a memorable day in the life of a student, Mr Naidu asked them to enter the next phase of their life with a renewed commitment to service. ‘I have always believed that if you serve humanity with a spirit of selfless dedication, you will derive boundless satisfaction,’ he told the passing out students. Calling the medical profession one of the noblest professions, the Vice-President emphasised the need for compassion and adherence to ethics and values in it.

‘Do not ever compromise on these values,’ he said. During the ceremony, the Vice-President was very glad to see that all the medal winners were girls. He congratulated them and underlined the need to provide equal opportunities to women in every field. Reminding the students that they were stepping out into a world that faces more complex challenges than their predecessors due to the ongoing pandemic, he wanted them to play a frontline role in this fight against novel coronavirus. Referring to the largest vaccination drive in the world against Covid-19 being undertaken in India, the Vice-President said the worst phase of the pandemic appears to be over. However, he cautioned people to remain vigilant and continue to take all the necessary precautions till ‘we defeat the virus decisively’. Expressing concern over the increasing burden of Non-Communicable Diseases (NCD) in India, the Vice-President cited the data from this year’s Economic Survey, which attributes about 65 per cent of deaths in the country to NCDs.

He called for a concerted effort by all stakeholders to arrest this trend of growing NCDs and suggested to ESIC to consider setting up exclusive NCD clinics in urban areas. The Vice-President wanted the young students to visit nearby localities and schools to create awareness about the role of a healthy lifestyle and nutritious food in curbing the incidence of NCDs. In his address, Mr Naidu also referred to several other health challenges that need to be addressed such as low doctor-patient ratio, shortage of medical colleges, inadequate infrastructure in rural areas, and low adoption of health insurance, among others. Expressing concern over the high rate of out-of-pocket expenditure on health in India, Mr Naidu called for ensuring quality healthcare for all at affordable rates. The Vice-President praised ESIC for running India’s largest social security program covering roughly 10 per cent of the country’s population. However, he also highlighted the scope for improvement to ensure better customer experience, grievance redress, and improved health outcomes and commended the Ministry of Labour and Employment for initiating major reforms in ESIC to ensure the safety, security, and health of every worker.

Mr Naidu also appreciated ESIC for several new initiatives such as MoU with National Health Authority (NHA) wherein the beneficiaries of ESI Scheme in selected districts can access services at Ayushman Bharat empanelled hospitals, and ESCI’s initiative to open its underutilised hospitals to the general public on nominal user charge basis. Mr Naidu also expressed satisfaction over India emerging as an attractive medical tourism hub in the region due to its state-of-the-art facilities and highly skilled professionals. Emphasising the importance of upholding values and following a righteous path in one’s life, the Vice-President asked the graduating doctors to lend a human touch while treating their patients. ‘Wherever you go, always spread light and optimism and help those in distress,’ he told the students. Union Minister of State (IC), for Labour and Employment Santosh Kumar Gangwar, Secretary, Ministry of Labour and Employment, Mr Apurva Chandra, Director General, ESIC, Ms Anuradha Prasad, Dean, ESIC Medical College, Faridabad, Dr Asim Das, faculty and students participated in event.

India will be fully Atmanirbhar in Silk production in the next two years: Smriti Irani