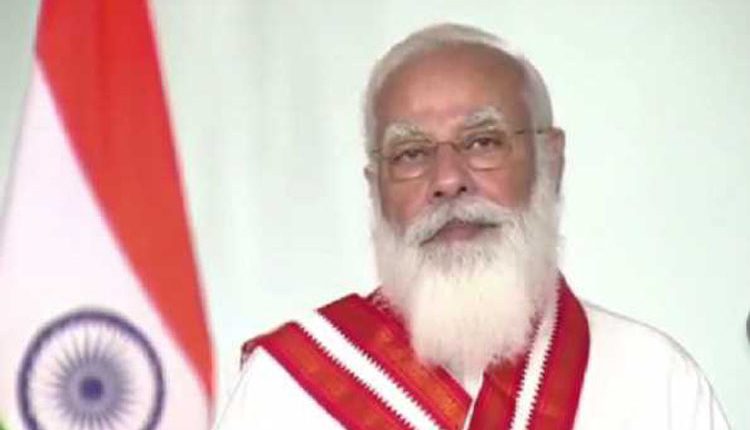 New Delhi, Mar 11 (FN Agency) Prime Minister Narendra Modi on Thursday launched the Kindle version of Swami Chidbhavananda’s Bhagavad Gita and said that the scripture makes one think, inspires to question, encourages debates and opens one’s mind. “The Gita makes one think. It inspires us to question. It encourages debate and keeps our minds open. Anybody who is inspired by Gita will always be compassionate by nature and democratic in temperament,” Prime Minister Modi said while speaking at the virtual event. He said that an e-book version of the second century BCE scripture would also deepen the connection between the eternal Gita and the glorious Tamil culture, enabling the Tamil diaspora to spread across the world for an easy read. It will also connect youngsters with noble thoughts and ideas, he said.

The Prime Minister hailed the Tamil diaspora for scaling new heights in many sectors while carrying the greatness of their culture to every corner of the world and said that the beauty of the Gita is in its depth, diversity and flexibility. “The beauty of the Bhagavad Gita is in its depth, diversity and flexibility. Acharya Vinoba Bhave described the Gita as a Mother who would take him in her lap if he stumbled. Greats like Mahatma Gandhi, Lokmanya Tilak, Mahakavi Subramania Bharathi were inspired by the Gita,” he added. Paying homage to Swami Chidbhavananda Ji, the Prime Minister said the mind, body, heart and soul of Swami Chidbhavananda Ji was devoted to India’s regeneration. He also said that Swami Vivekananda’s Madras lectures inspired Swami Chidbhavananda Ji to put the nation above everything else and serve the people, adding that on one hand Swami Chidbhavananda Ji was inspired by Swami Vivekananda and on the other hand he went on to inspire the world with his noble deeds.

Mr Modi praised Shri Ramakrishna Mission for their commendable work in community service, healthcare, education and carrying forward the noble work of Swami Chidbhavananda Ji. Elaborating the salient features of this holy scripture, he further said that the Shrimad Bhagavad Gita was born during conflict and depression and humanity is passing through similar conflicts and challenges now. “Bhagavad Gita is a treasure of thoughts that reflects the journey from depression to victory and the path shown in the Shrimad Bhagavad Gita becomes ever relevant at a time when the world is fighting a tough battle against an epic global pandemic and bracing for a far-reaching economic and social impact”, PM Modi said. Quoting a review of a journal of cardiology published by the University of Oxford which talks at length about the relevance of Gita during the time of the COVID pandemic, he said the core message of Srimad Bhagavad Gita is action because it is far better than inaction. Similarly, the core of Aatmanirbhar Bharat was to create wealth and value not only for ourselves but for the larger humanity. Mr Modi said that an Aatmanirbhar Bharat (self-reliant India) is good for the world and also recalled how our scientists came out quickly with vaccines for COVID-19 to heal and help humanity, keeping up with the spirit of Gita.