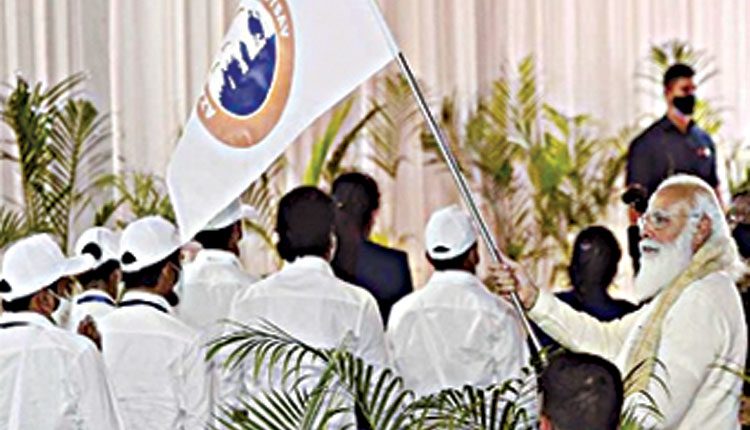 To commemorate the 75th year of Independence, the government has decided to organise ‘Amrit Mahotsav’ in which events on weekly basis will be held in the next 75 weeks till August 15, 2022. Mr Modi also took to twitter to urge people to buy local products. “Buy any local product and post a picture on social media using ‘Vocal For Local’. A Charkha will be installed near Magan Niwas at Sabarmati Ashram. It will rotate full circle with each Tweet related to Aatmanirbharta. This shall also become a catalyst for a people’s movement,” he tweeted.

During the inauguration of the ‘Mahotsav’, Gujarat Governor Acharya Devvrat, Chief Minister Vijay Rupani, Union Minister of State for Tourism and Culture (Independent Charge) Prahlad Singh Patel, MP and Gujarat BJP president C.R. Patil, trustees of the ashram Karthikeya Sarabhai, Amrit Modi and Dr. Sudarshan Iyengar were also present. In the ‘Mahotsav’, various cultural programs were also organised, in which artists across the country gave attractive performances in different languages. On March 12, 1930, Gandhi traveled to Dandi in South Gujarat to break the salt law of British rule, which was completed on April 6 of the same year.