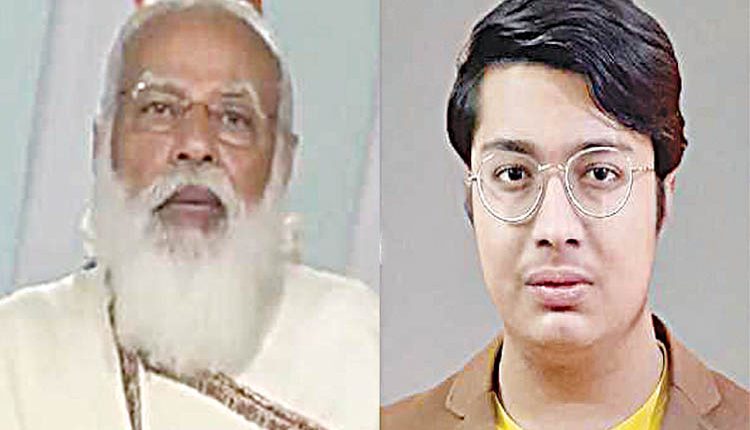 New Delhi, Feb 22 (FN Bureau) While most of the pupils in his class learnt by heart the chronologies in history class, 6th grade student Souhardya had been writing history, literally!!! In a span of few years, Souhardya, a resident of Medinipur in West Bengal, rose to an author of historical fiction, a renowned art and culture columnist, a podcaster and a Fellow of the Royal Asiatic Society of Great Britain and Ireland. His achievements have made him a favourite of all, with no one remaining unfazed by his talent, including none other than Prime Minister Narendra Modi! Taking to micro-blogging site Twitter, Mr Modi posted, ‘Imagine being an acclaimed author writing on art and history at the young age of 16. That is my young friend Souhardya De from West Bengal.” ‘He has been awarded the Bal Puraskar, yet another feather in his cap. I wish Souhardya all the best. May you inspire many more young minds,” Mr Modi added. Souhardya, the recipient of this year’s Pradhan Mantri Rashtriya Bal Shakti Puraskar, also took the Prime Minister’s advice in a virtual interaction as a very special one.

‘He advised us on the three most crucial teachings of life: never to forget your roots, to let this recognition propel you forward and to stay grounded no matter to whichever position the world uplifts you to! These points are something that I really do adore and would always like to treasure them as the three bits of motivation for myself!,’ said the young achiever. In an interview, Souhardya said that he intends to revitalise and invigorate the Indian art and culture, history and mythological epics through his works and tries to author them in a way most appealing to the readers of today. Until now, he has authored two books on history and mythology–The Chronicles of Suryavansh and The Scion of Suryavansh–and is currently working on a history-meets-fiction story on Mughal era that revolves around the initial days of the third Shahanshah, Akbar on the grounds of Hindustan, a land that then, was an alien to him but of which, he today, is regarded to be the greatest ever Mughal Emperor of. ‘Both of my parents are into history. My father, who’s a professor at Midnapore College presently, enticed me into reading rare books and ancient manuscripts since I was quite young. And my mother, as I tell everyone, has a way with words. She crafts stories out of real historical events, fictionalising them and hence creating a perfect visualisation! By any means, that is what I mean by the historical fiction genre.

So yes, my background has a lot to give!”, describes the teenager about his background. He also tells about his debut. ‘The way my debut was born is quite an interesting story in itself. It is entitled ‘Scion of Suryavansh’ and is an actual rendering of the Ramayana in the English poetical metrics. It is not more than 54 odd pages but yet, every time I look at it, it seems like I’m just beginning to grow as a writer. So, those were the summer holidays of 2017 and my parents had gone out for work. Being left at home alone, without network connectivity and games to play, I focused on doing something creative. And that’s when it struck me that I could definitely write up a book, if not anything else!” Asked about his inspiration, Souhardya said, ‘I am mostly inspired by authors of very high repute, including Devdutt Pattanaik, Amish Tripathi, Kavita Kane, Ira Mukhoty and so on. Basically, I used to read a lot as a child and have around 50 favourite authors in my list.’ An interesting feature to note here is that almost all of the aforementioned writers write in the neo mythological genre (except for Ira Mukhoty and Devdutt Pattanaik, who write non-fiction).

Devdutt writes mythological non fiction while Ira Mukhoty writes Non Fiction History (especially with a focus on the Mughal regime). My genre is historical fiction or in cinematic terms, period drama. In that way, you can of course count Sanjay Leela Bhansali and SS Rajamouli amongst people who inspired me indirectly to take up this genre.So, going by the authors I’d mentioned earlier, I would say I am a combination which is because I write history but in fictional terms, I write fiction but not without a historical background affixed to it. Mughals for that part are my favourite because of the highly opulent structures and the grandiloquent architecture their palace palisades and fortress bastions bolster!, he adds. There’s one statement that I would like to quote here.

I have said this earlier too, when I was being interviewed on a travel podcast hosted by my friend Kevin Harding and I consider this to be one of my greatest life lessons. It is the hugely popular ancient Roman proverb called “Carpe Diem” which in English, translates to “Seize the Day!” About his take on the ongoing Coronavirus Pandemic, Souhardya said, although the COVID has been very brutal to us, presumably like never before, humanity has never lost its way in the pandemics that have occured through the ages, and I believe that we’ll come out of this very thing, soon enough. As for myself, COVID did provide me an opportunity to get to my inner soul and find the purpose of my existence which is Japanese words is Ikigai (the reason of being). Hence it rests completely upon us as to whether we want to transform ourselves into what we are born for or loom at the existential crisis that the pandemic has put us into!

India is a force for global good: Foreign Secy