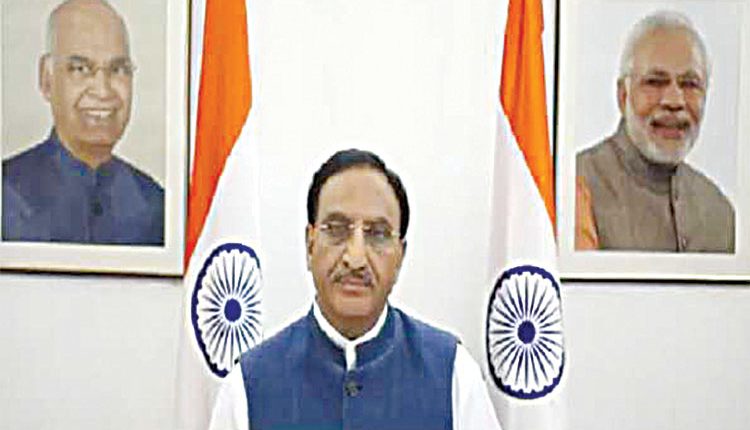 New Delhi, Dec 3 (FN Bureau) Union Education Minister Ramesh Pokhriyal ‘Nishank’ on Thursday said India’s education policy has emerged as the world’s biggest reform and through this policy, the governemnt was committed to establishing India as a global ‘superpower of knowledge’. Addressing a webinar organised by Aligarh Muslim University (AMU) on National Education Policy-2020, Dr Pokhriyal said, “While the year 2020 will be remembered for the pandemic, on the other hand, it will also be recorded in history for our attempts to turn challenges into opportunities.” He said while the whole world was busy in the process of reform through adjustment and modification in its educational system, the country had got the gift of a new national education policy under the leadership of Prime Minister Narendra Modi.

The minister said, the policy incorporated Indian values ​​from character building to nation building and had raised every aspect such as Vocational Studies, Skill Development, Research Management, Talent Development which will make the next generation, our students a better human and create human wealth to suit future needs. “Through this new policy, we are fully ready to take India on a long leap under the leadership of the Prime Minister towards reclaiming the reputation of ‘Vishwaguru’ and creating a 5 trillion dollar economy. The path to achieve such a grand goal goes through self-sufficiency and India needs to emerge as a hub of global innovation, entrepreneurship and startups to become self-reliant,” he added. On the implementation of the new NEP-2020, Dr Pokhriyal said we have taken all the steps in this direction like ‘Visitor Conclave, Governor’s Conclave, Education Conclave’. It is a matter of great pleasure that various institutions, states/union territories were forming task forces at their respective levels for the implementation of the policy and have taken effective steps to make the policy successful. He praised AMU and said that it is also taking seriously every aspect related to the policy from schooling to university level by forming various committees to comply with the National Education Policy. Former AMU Vice Chancellor Professor Mohammad Sajjad Athar released the book “The Physics of Neutrino Interaction” (Cambridge University Press) written by Professor SK Singh on the occasion. UGC Chairman Prof D P Singh, AMU Vice Chancellor Prof Tariq Mansoor, Dean of Science Department of AMU Qazi Mazhar Ali and author of the book Prof S K. Singh, other faculty members and students were present.