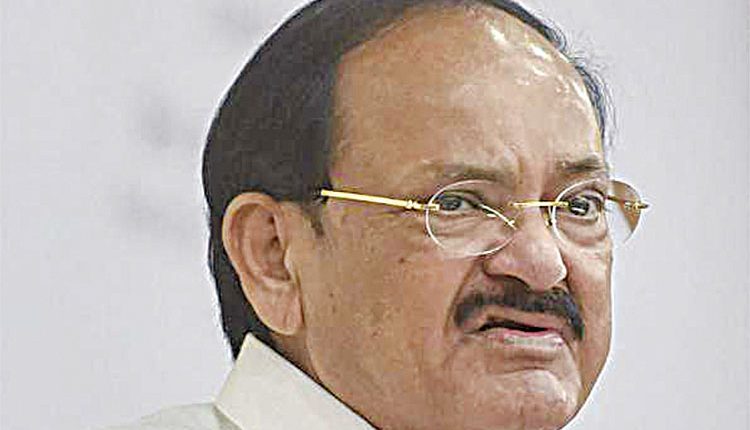 New Delhi, Mar 12 (FN Bureau) Vice-President M Venkaiah Naidu on Friday called for concerted efforts to eradicate poverty, illiteracy, corruption and other social evils like gender discrimination to build economically stronger India. He called for concerted efforts of people on the occasion of the launch of ‘Azadi Ka Amrit Mahotsav’ – a 75-week festival to commemorate 75 years of India’s Independence by Prime Minister Narendra Modi. The Vice-President posted on facebook that this was a defining moment in our national journey and an opportunity to recollect the legacy bequeathed to us by the Mahatma and the countless freedom fighters. ‘We must strive to become Atma Nirbhar or self-reliant in all areas—that is the greatest tribute we can pay to our freedom fighters,’ the Vice-President said.

The Vice-President reminded that ‘as we enjoy the fruits of our independence, we must also understand that this vision of freedom is fully realised only when we achieve the goals and promises we have set for ourselves in the Constitution.’ Referring to the padayatra which commenced today from Sabarmati to Dandi over 25 days, retracing the footsteps of Bapu during the historic Salt March, he said it is a befitting celebration of India’s hard-earned Independence and marks a unique way of mapping the nation’s eventful journey since Independence. Remembering the great Dandi March, Mr Naidu said that it electrified the nation at that time with a simple but powerful symbol of salt. He said Gandhiji, with his unwavering commitment to non-violence and an iron will to take what is rightfully ours, showed the British and the world that India will not bow down to force and repression. He also stressed the need to educate youth on the lives of our great heroes and how thousands of courageous men and women of our great nation stood in the frontlines of the freedom struggle and helped India overthrow the yoke of colonial rule. The Vice-President advised that for India to become more prosperous and stronger, it is of vital importance for the people and particularly the youngsters, to adopt a healthy lifestyle.

‘We should also go back to civilisational roots, uphold universal values, remain environmentally conscious and always live in harmony with nature. It is our duty to handover a greener and healthier planet to future generations,’ he noted. Mr Naidu also added that ‘we must all resolve to be at the forefront to fight and foil attempts by forces that try to divide people on superficial grounds.’ He observed that we believe in the liberty of the individual and the peaceful co-existence of all communities, and recognise the common bonds that unite all of us. ‘This ‘Bharatiyata’ is what keeps us united,’ he emphasised. He referred to schemes like Saubhagya Yojana, Ayushman Bharat and Kisan Samman Nidhi as efforts of Government in ensuring an ‘ease of living’ and delivering the fruits of benefits to everyone. In this context, he also observed how the governance model has evolved from a top-down and monolithic approach to a decentralized, citizen-centric, and participatory approach. He reminded that it is our duty to include the marginalised sections—the differently-abled, women, elderly and transgender persons in our democratic process and enable them to partake of the benefits of development. He advised that we must ensure that every citizen has access to good education, health, employment and nutrition. In the concluding remark, the Vice-President urged the people to come forward in large numbers, participate pro-actively in the Mahotsav, and strengthen the roots of our democratic republic. He wished the Mahotsav a grand success.

India has more Female Commercial Airline Pilots in the World