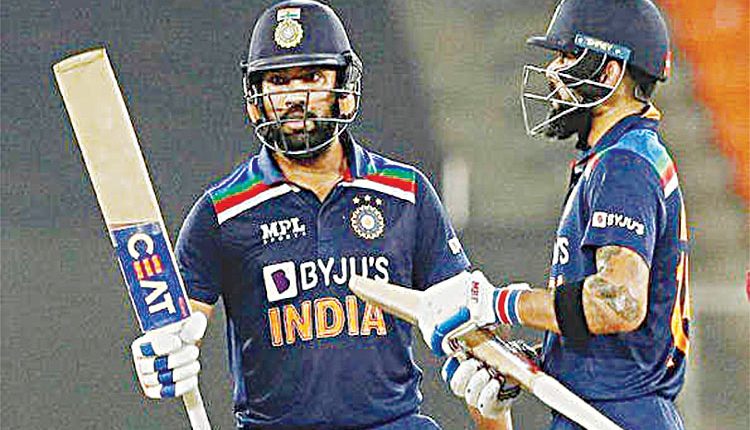 Dubai, Mar 24 (FN Bureau) Captain Virat Kohli and vice-captain Rohit Sharma are among the India batsmen to progress in the latest ICC Men’s T20I Player Rankings released on Wednesday after clinching a home series against England 3-2 in Ahmedabad. Kohli, who slammed an unbeaten 80 off 52 balls coming in as opener and was associated in a stand of 94 with Rohit that set the platform for the 36-run victory in the third T20I, has moved up one place to fourth position and is now the highest ranked from his country ahead of Lokesh Rahul. Rohit’s 34-ball 64 in that match has helped him move up three places to 14th in the latest weekly rankings update which took into account the three-match Afghanistan-Zimbabwe series in Abu Dhabi apart from the last two matches of the India-England series, the ICC said in a statement. In other gains for India’s batsmen, Shreyas Iyer has moved up five places to a career-best 26th position while rookie Suryakumar Yadav and wicketkeeper-batsman Rishabh Pant too have made rapid progress.

Yadav, who debuted in the second match of the series but could not garner any points as he did not get to bat, has pushed up from the bottom to 66th position after scores of 57 and 32 while Pant has moved up 11 places to 69th in the rankings. Seam bowler Bhuvneshwar Kumar, player of the match in the last match for his spell of two for 15, has moved up 21 places to 24th while Hardik Pandya has advanced 47 places to 78th. For England, Dawid Malan maintains a healthy lead at the top of the rankings after his 68 in the final match while Jos Buttler has inched up one place to 18th.

Leg-spinner Adil Rashid (up one place to fourth) and fast bowlers Jofra Archer (up 12 places to 22nd) and Mark Wood (up 12 places to 27th) have advanced in the bowlers’ list. Afghanistan too had a lot to cheer about after whitewashing Zimbabwe 3-0 with Rahmanullah Gurbaz gaining 16 slots to reach a career-best 21st position after topping the series aggregate with 114 runs. Najibullah Zadran (up five places to 41st), captain Asghar Afghan (up six places to 52nd) and Usman Ghani (up 39 places to 85th) have also made headway. However, leg-spinner Rashid Khan has lost his place at the top of the rankings despite finishing with six wickets in the series as he conceded 7.60 runs an over. South Africa spinner Tabraiz Shamsi is now number one for the first time in his career. Rashid had been pretty much at the top since 5 February 2018, only dropping to second place for two days in March 2020. Karim Janat (up eight places to 30th) and Naveen-ul-Haq (up 48 places to 94th) are the Afghanistan bowlers to advance in the latest update, while for Zimbabwe, Ryan Burl (up 38 places to 102nd among batsmen) and Blessing Muzarabani (up 24 places to 102nd among bowlers) have made significant progress.

In the ICC Men’s ODI Player Rankings, Jonny Bairstow is up four places to a career-best seventh position after his knock of 94 in the opening match of the ICC Men’s Cricket World Cup Super League series against India in Pune. Captain Eoin Morgan has advanced one place to 24th. All-rounder Ben Stokes has moved up from 75th to 64th among bowlers while also leapfrogging compatriot Chris Woakes to third place among all-rounders. India opener Shikhar Dhawan’s match-winning 98 has lifted him two places to 15th and Bhuvneshwar Kumar has gained five places to move into the top 20 in the latest ODI update, which considered performances in the opening India-England ODI and the first two matches of the New Zealand-Bangladesh series. New Zealand, who have taken a winning 2-0 lead, see left-hander Tom Latham move up five places to 30th and to a career best 631 rating points after notching 110 not out in the second match. Matt Henry has moved into the top 10 (from 11th to eighth) and Mitchell Santner has gained eight places to reach 25th among bowlers. For Bangladesh, Tamim Iqbal has gained three slots to reach 19th position and Mohammad Mithun has jumped from 94th to 82nd.