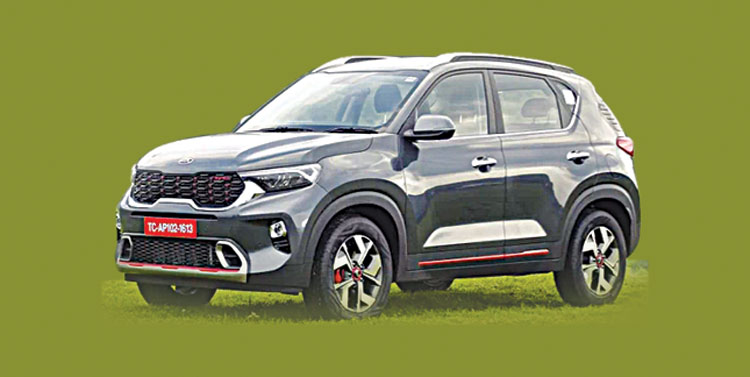 India is a rather interesting market when we talk about cars. It’s one of the largest markets in the world, yet is not innovation friendly when it comes to affordable cars. However, Kia Motors, the South Korean changed this landscape, helping it become the fourth largest carmaker in no time. When introduced in 2019, Kia Seltos instantly became popular in a country obsessed with SUVs and later, Kia Sonet, the compact SUV pushed the brand’s sales.

The Kia Sonet is a sub 4-metre compact SUV, yet has a road presence not less than cars from a segment above. There’s enough stand out elements like signature Tiger Nose Grille flanked by distinctive Crown Jewel LED headlamps and ‘Heartbeat’ LED DRLs, connected taillight unit with ‘Heartbeat’ LED tail lamps, dual muffler design and a large skid plates. Kia is offering the Sonet in two trim lines – Tech Line and GT Line – with GT-Line adding extra dash of sportiness thanks to black high glossy elements with red accents that are carried forward inside the cabin.

The cabin, in itself, is a masterpiece and gets more than 30 segment-first features including Smart Pure Air Purifier with Virus Protection, Front Ventilated Seats, LED Sound Mood Lamps, Wireless charger with Cooling Function, and 10.25-inch touch screen infotainment system that dominates the dashboard. The system is well complemented by BOSE Premium 7-speaker surround sound system. Kia Sonet also gets brand’s UVO connectivity system with 57 commands including Remote Engine Start for both Automatic and Manual Transmission. Apart from design and features, what largely worked in favour of Sonet is the multitude of engine options, which includes 4 engines and 5 gearbox options.

The range starts with the 1.2-litre petrol engine producing 83 PS of power and 115 Nm of torque and gets only a 5-speed manual gearbox. Next is the detuned version of 1.5-litre diesel engine producing 100 PS and 240 Nm of torque and is mated to a 6-speed manual gearbox. While these two are regular set of engines, the real fun lies in the other two engines. There’s the 1.5-litre diesel engine borrowed from Seltos as it is and produces 115 PS and 250 Nm output. The engine is mated to an automatic gearbox. And then there’s the top of the line 1.0-litre turbo GDI engine with 120 PS power output and 172 Nm torque. This gearbox is the sole gearbox to get two gearbox options, a 7-speed DCT gearbox and the much talked about and newly introduced 6-speed iMT gearbox. Safety and build quality has become paramount even for budget car buyers in India thanks to agencies like Global NCAP. Kia has been at the forefront of both these aspects in its home turf of South Korea and brings the same quality to India. In terms of safety, Kia Sonet gets Six Airbags, ESP, ABS with EBD, Hill assist, TPMS and more. It also gets traction modes and virtual safety assist thanks to UVO Connect.
Lastly, pricing of the Kia Sonet. No matter how many gadgets you add to a car, pricing will still remain crucial for Indian car buyers and Kia Sonet has an attractive price range. It starts at Rs 6.79 lakh for the base variant and goes upto Rs 13.20 lakh for the GTX plus dual tone variant. There are more than 20 variants to choose from in between this pricing which also means there’s a variant to match your buying preference. So there you go, just like the Seltos, the Sonet has also proved to be a milestone for Kia in India. We can only hope Kia keep on bringing such innovative and exciting products to the Indian shores.