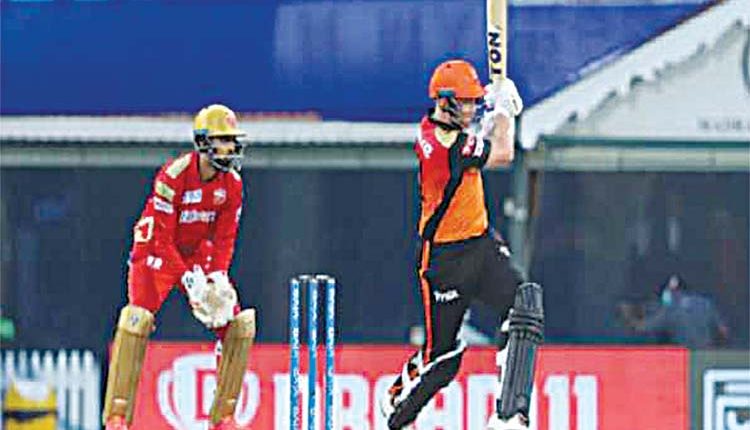 Chennai, Apr 21 (Agency) Opener Jonny Bairstow scored a disciplined half century as former champions Sunrisers Hyderabad (SRH) huffed and puffed, before romping home by nine wickets over Punjab Kings for their first win in this edition of the IPL here today. After the bowlers restricted Punjab Kings to 120 all out in 19.4 overs with left arm seamer Khaleel Ahmed claiming three wickets and spinner Abhishke Sharma cliaming two, SRH skipper David Warner scored a run a ball 37 (3×4, 1×6) and added 73 for the first wicket with Bairstow in 10.1 overs. With the pitch offering some assistance to the spinners, Bairstow in the company of Kane Williamson overhauled the target, scoring 121 for one with eight balls to spare in a low-scoring contest.

While Bairstow remained unbeaten on 63 (56 balls, 3×4, 3×6), Williamson was unbeaten on 16 (19 balls). SRH started their chase in a typical blazing fashion as openers Jonny Bairstow and David Warner picked runs at a quick pace. A couple of boundaries and sixers by both the batsmen helped SRH reach 40 for no loss in five overs at 50 for loss at the end of power play. However, things started slowing down as left arm pacer Arshdeep Singh, who bowled several slower balls and spinners M Ashwin, Fabien Allen and Deepak Hooda bowled a tight length as boundaries were hard to come by on a sluggish pitch.

SRH reached 73 for no loss at the half way stage, before Warner fell (37, 37 balls, 3×4, 1×6) in the first ball of the 11th over bowled by left arm spinner Fabien Allen. However, Bairstow and Kane Willamson, playing his first match after recovering from an injury, brought their experience to the fore and picked runs in singles and twos to keep the scoreboard. Just 22 runs came between the tenth and 15th over as SRH needed 26 in the last five overs. Bairstow, who held the innings together, scored his half century with a pull of Hooda in 48 balls (3×4, 2×6) as the target boiled down to ten in two overs. A six by Bairstow off Arshdeep Singh sealed the win for SRH and Punjab Kings were pushed to the bottom of the table.