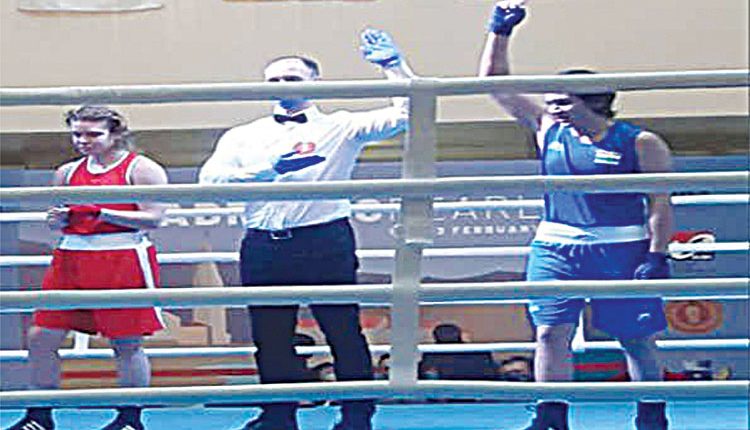 New Delhi, Feb 19 (Agency) The 2019 Asian Youth gold medallists Babyrojisana Chanu (51kg) and Vinka (60kg) have advanced to the semi-finals at the 30th Adriatic Pearl Tournament in Budva, Montenegro and secured at least bronze medals with dominating wins in the first round. Manipur’s Babyrojisana Chanu did not put a foot wrong on Thursday and dominated her opponent Georgieva Blagovesta of Bulgaria from the word go and as a result, the referee had to stop the contest in the 1st round. She will face Uzbekistan’s Feruza Kazakova in the semi-final.

Rohtak’s Vinka, who was up against Uzbekistan’s Sevara Ashurova in the quarter-finals bout, produced a flawless display of her attacking prowess. The young pugilist’s attacking acumen was widely appreciated by everyone as she advanced to the last-four stage where she will face Finland’s Suvi Tujula. Meanwhile, the 2018 Best Asian Women’s Junior Boxer Arundhati Choudhary (69kg) also started her campaign impressively as she blanked Finland’s Evelina Taimi 5-0 and ensured a bronze medal for her. However, it was a tough day for the men boxers as Arambam Naoba Singh (52kg), Sumit (69kg), Vishal Gupta (91kg) lost their respective quarter-final bouts.

While Jugnoo (91+kg) moved to the semis, courtesy a walkover. Apart from Babyrojisana Chanu (51kg), Vinka (60kg) and Arundhati Choudhary (69kg), Neha (54kg) and Sanamacha Chanu Thokchom (75kg) will be the other women boxers in contention to reach the final whereas Alfiya Pathan (81+kg) will face Moldova’s Daria Kozorev for gold medal. Two male boxers – Akash Gorkha (60kg) and Ankit Narwal (64kg), will also be competing in the quarter-finals tonight. Other women boxers assured of a medal are Preeti (57kg) and Lucky Rana (64kg) as they are already in semis while Geetika (48kg) and Raj Sahiba (75kg) will play in the final in their respective category. Among men, Priyanshu Dabas (49kg) and Jugnoo (91+kg) have secured at least a bronze medal as they will be seen in action in the last-four stage.

WHO believes badgers, rabbits could have spread COVID-19 to humans