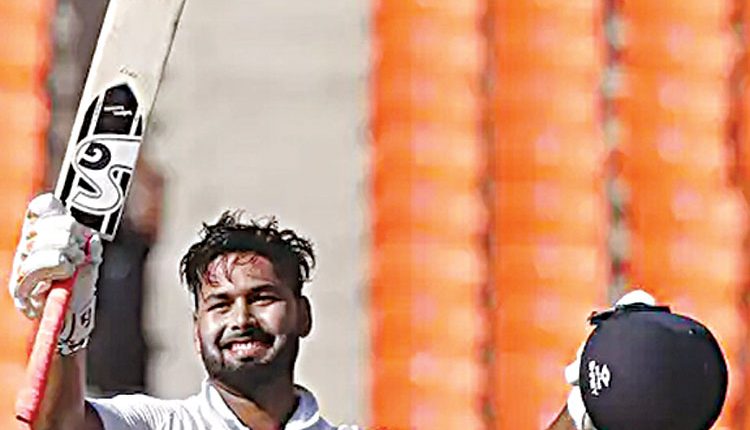 Ahmedabad, Mar 5 (Agency) Here at the bare stats – India 294 for 7 and lead by 89. Rishabh Pant made 101 and had plenty of support from Washinton Sundar (60 not out) as the pair made 113 for the seventh wicket. A glance at the scorecard will make you feel India dominated the second day in Ahmedabad. That, however, wasn’t the case. India had complete control of proceedings only in the third session and spent the first two trying to find answers to the challenges thrown at them by James Anderson, Ben Stokes and Jack Leach.

India started the day on 24 for 1 and were hoping to bat ‘sukoon se’ for the next two days. The pitch, however, offered valuable assistance to both pacers and spinners as England bossed the first session. India scored just 12 in the first ten overs. Anderson kept things in check while Stokes kept testing Pujara with short deliveries. Leach bowled the tenth and threatened to take a wicket immediately. He beat Rohit Sharma’s outside edge and had Pujara edging one just short of first slip.

Pant’s arrival also brought in some urgency in run-scoring. India had scored at just 2.17 in the first session but scored at over three in the second. Dom Bess was the run merchant India desperately needed and the off-spinner came stocked with boundary-gifting full tosses. There were far too many and Rohit picked boundaries with ease to move to 49. He got stuck one short of half-century and eventually fell to Stokes as the all-rounder put in a herculean effort with the ball. Pant isn’t the same batsman who tries to hit his way out of trouble. He’s far more established, far more comfortable with his craft and trusts his approach much more to put in the results. There were runs to be made in the final session against a tiring attack and Pant and Washington made merry.

The real flourish came from the 78th over with the partnership already past the 50. Pant smashed Root for back-to-back boundaries to pick up crucial runs before the new ball just after India bagged the lead. As England took the new ball, Pant too decided to change gears. The first ball of the 80th, he charged down the track to launch Anderson over mid-off. Such was the authority that even Stokes, at his haunches at slips, nodded in approval of the shot. The next delivery was slapped to the cover fence. Stokes was spent and couldn’t quite replicate the control he had early in the day. Pant got boundaries and so did Washington. The most outrageous shot came from Pant in the 83th over when Pant reverse-swept Anderson over the slips. Even the pacer was shocked with the audacity of the stroke. Stokes continued to leak boundaries as India pushed the lead past 50. Pant got to his third Test ton in the 84th with a slog-swept six against Root. He, however, fell to Anderson in the next over when he slapped a short ball to short mid-wicket.

Washington got his half-century and had plenty of support from Axar Patel as India managed to surge ahead in the contest after five tight sessions. India made 141 in the final session – at 4.40 runs per over – to ensure England were left deflated after a hard toil.