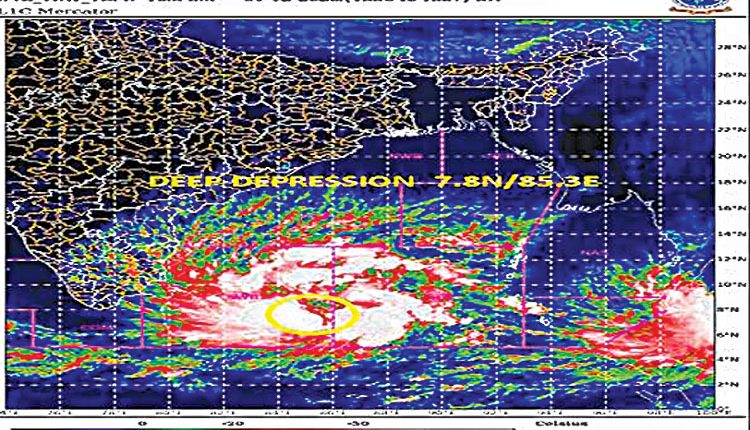 New Delhi, Dec 1 (Agency) The India Meteorological Department (IMD) has declared a pre-cyclone watch for South Tamil Nadu and South Kerala coasts. Issuing a ‘Yellow Message’, the IMD on Tuesday said it is very likely to happen a cyclonic storm during next 24 hours and sent an alert for south of Tamil Nadu and south of coastal Kerala. The depression over southeast Bay of Bengal moved westwards, intensified into a deep depression over southwest and adjoining southeast Bay of Bengal in the early morning (0530 hrs IST) of December 1 and at 0830 hrs IST today, it lay over the same region about 500 km east-southeast of Trincomalee (Sri Lanka) and 900 km east-southeast of Kanyakumari, the cyclone warning department of IMD informed.

Under this change in weather conditions, sea condition will be very rough over southeast Bay of Bengal and it will continue during December 1st and in Comorin Area, Gulf of Mannar and along & and off south Tamilnadu-Kerala coasts from December 2nd to 4th. Fishermen have been advised not to venture in the sea and total suspension of fishing operation during December 1- 4 whereas they have been advised to return to the coast by the Tuesday evening.