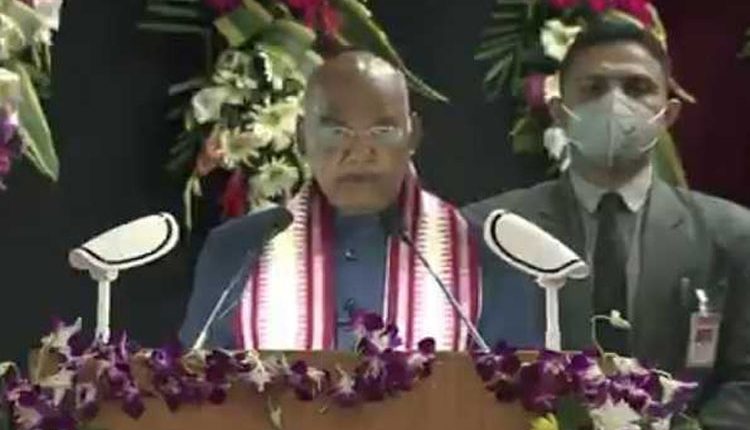 Rourkela, Mar 21 (FN Bureau) Growth and excellence of women in technical areas will add a new dimension to our national development and promote gender empowerment at the higher levels in the field of science and technology, President Ramnath Kovind said. Addressing the 18th convocation of the National Institute of Technology, Rourkela, today Mr Kovind said the country needs more of our girls to pursue higher education, especially in Science, Technology, Engineering and Mathematics.

It will help women break the glass ceiling in one of the most important spheres in the world of the 21st century. The President emphasized that girls should be encouraged to pursue technical education and excel in the same manner as they do in other areas. Mr Kovind said in most of the convocations he attended across the country, he noticed that girl students are outshining boy students in liberal arts, humanities, medical sciences, law and several other areas. However, it has been observed that the enrollment of women in technical and scientific disciplines is low. According to a recent survey, enrollment of women in Engineering and Technical Institutes across India is only about 20 per cent. Speaking about the need for “Universities’ Social Responsibility” in line with “Corporate Social Responsibility”, the President said that universities and institutions must contribute towards empowering the community in their surroundings. Mr Kovind said “ I am happy to note that NIT Rourkela has adopted five villages, as part of Unnat Bharat Abhiyan’ and upgrading science laboratories as well as providing computer education in those villages.

He appreciated the commendable initiative of the NIT, Rourkela on the Poverty Alleviation Research Center working for the less-privileged people of Kalahandi, Balangir and Koraput region of Odisha Referring to the implementation of the National Education Policy 2020, the President said the policy envisions that engineering institutions should move towards more holistic and multi-disciplinary education with increased emphasis on arts and humanities. He noted that NIT Rourkela has already adopted this approach to a certain extent and expressed confidence that this institution would take the process further and would also work towards implementing other salient features of the National Education Policy. Mr Kovind said one of the objectives of the National Education Policy is to make India a global knowledge superpower in the 21st century and institutions like NIT Rourkela have to play a major role in achieving these national aims.