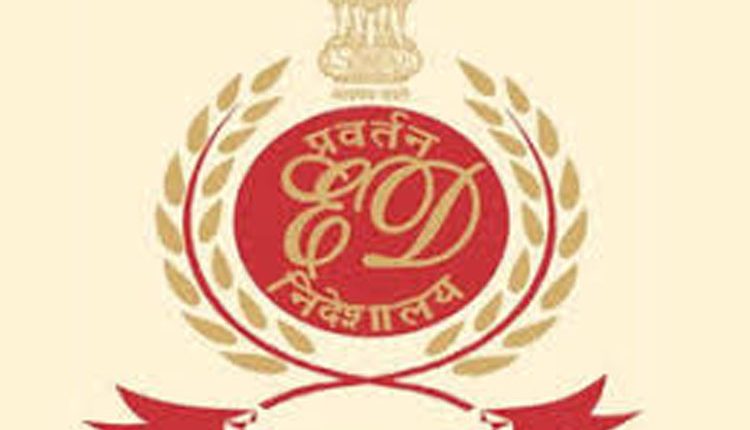 New Delhi, Dec 23 (Agency) The Enforcement Directorate (ED) on Tuesday said that it has provisionally attached assets worth Rs 6.03 crore of various accused and their associates in a case related to the Buyers Credit fraud of Rs 299 crore in the Indian Overseas Bank at Chandigarh, under the Prevention of Money Laundering Act, 2002 (PMLA).

According to ED officials, the attached properties consist of FDRs worth Rs 56.65 lakh of a residential flat belonging to Supriya Kataria and her husband Sunil Kataria, land measuring 10 kanal and 16 marle of Prenda Creations Pvt Ltd at Khakat village, Sahnewal in Ludhiana, a plot measuring 999 sq yd at Mundian Kalan, Ludhiana of Aishna Kirpal, plot measuring 7260 sq yd at Birmi village in Hambran Road, Ludhiana of Radhika Kirpal, who is wife of Aman Kirpal, residential property comprising of first floor at Uppal’s Southend Sector 48 and 49 at Gurugram of Ankita Maingi and two FDRs of Rs one lakh each in the name of Dreamheight Homes Pvt Ltd and Global Printlink Graphics Pvt Ltd in ICICI Bank.

The central financial probe agency initiated investigations under the PMLA on the basis of an FIR registered by the CBI, New Delhi against Indian Overseas Bank Assistant Manager Ashu Mehra, proprietor of Heights International Amanpreet Singh Sodhi, proprietor of Vision Procon Dinesh Kumar, directors of Saibhakti Impex Pvt Ltd Gaurav Kirpal and Aman Kirpal and others, under Section 120B read with 420 of Indian Penal Code, 1860 and Section 13(2) read with 13(1)(d) of the Prevention of Corruption Act, 1988.

A charge-sheet was filed by the CBI against the accused revealing the wrongful loss to the bank to the tune of Rs 299.14 crore on account of the fraudulent unpaid Latter of Undertaking (LOU)and that further, amount of Rs 11.36 crore commission for 24 LOUs which was also not received by the bank. There were lapses on the part of Branch Managers of IOB Anil Kumar, P C Rana and N Chokalingam as well as on the concurrent auditors and the payments for the air travels and hotel stays of the accused Ashu Mehra and his family members was borne by accused Dinesh Kumar and Gaurav Kirpal.

Investigation, so far, revealed that the accused Amanpreet Singh Sodhi, Dinesh Kumar and Gaurav Kirpal were conspired with accused Ashu Mehra, the Assistant Manager of Indian Overseas Bank, Chandigarh for illegal diversion of funds to the bank accounts of fraudulent buyers on behalf of Indian import firms. “These amounts were first credited by the overseas funding bank Bank of Baroda, Bahamas and Punjab National Bank, Dubai into the HSBC Account of the Hong Kong based export company Colour Wave (HK) Ltd though no imports took place. The accumulated amount in the HSBC Account of Colour Wave (HK) Ltd were further remitted to India in the accounts of accused firms and companies by showing it as adjustments for exports of third-party payments”, the probe agency official said.

It was revealed that the goods were either exported by the accused to different buyers or consignees by resorting to gross over-valuation or in some cases there was no export, they added. In this manner the accused have generated the ‘proceeds of crime’ by resorting to trade-based money-laundering. On identification of assets amounting to Rs 6.03 crore, a provisional attachment order under PMLA has been issued. Earlier, the Directorate has also attached assets of the accused totalling to Rs 85.15 crores, making the total attachment under PMLA at Rs 91.08 crore, the ED said, adding that further investigation in this case was under progress.